Managed to lurk here for a bit then randomly posted this morning so figured a post in the Newbie Central was warranted.

There’s a few familiar names and folks from other forums I use here so I’m sure some will join the dots and think “damn that wanker’s everywhere, is he following me?”

Back to the story, Middle Aged (hitting 45 next year) and have been back riding for a grand total of 2 months. I bought myself a Merida Big Nine 40D and discovered that while I can walk 25+km a day, and average around 10000 steps most days I have zero cardio/bike fitness.

That first ride was awesome, the speed, the wind in the helmet, then I got to the end of the street and the burn started. Yeah the first 5km I rode was brutal I was winded, the legs jelly and my arse was sore. I really regretted that $1k purchase of bike and gear.

However then I let the Bryton 310 upload into Strava and discovered in my little loop near home I wasn’t the slowest on a few segments. It gave me hope and a comparison point to try better.

The next day I did it again.

Strava segments showed I was still not the worst in my neighbourhood.

It took a few days or so and I ventured further, along the Canberra cycle paths and working out the distance to the pub or to work was 15 minutes ride with virtually no time dodging cars.

Then I got adventurous and rode out to the trails along the Murrumbidgee River that I walk a fair bit and discovered that I’ve got a lot to learn. That was barely an 18km round trip punctuated with lots of stops and yet a feeling of great accomplishment.

See I’d been walking up those trails for kilometres to fly a drone, capture some aerial shots and generally work on my overall fitness but every time someone would ride past I’d be thinking just how much further I could go. 13km round trips with the occasional ankle twist and the iffy hip I picked up in Malaysia a couple years back had me thinking a bike would be smarter.

Then I sodded off in a holiday and 4 weeks later have had to start again.

So here I am, getting back used to riding, working out that a 20mm change in seat height completely changes arse pain level, that 109kg dudes and 160mm front brakes aren’t a match made in heaven, and that when the bike shop guy says “the spokes will need tensioning after a few rides” means learning to roughly true a wheel sitting in the dirt with a pair of pliers.

At least I haven’t bought Lycra, I’ll just be that guy serious riders fly past who’s just getting between point point a and b getting fitter and enjoying being outside.

So far 120km-ish logged and enjoying all the bits that don’t suck. I think the Bryton-Strava really are the difference for me, I know I’m feeling better in the bike but having a comparison point to both my previous performance and that of the true MAMIL’s is helping me understand the relevance of cadence (yeah I have a cadence sensor and probably should have heart rate as well considering the way it feels at times) to speed to distance and comfort.

Strava is good to keep track of your progress and a good goal to push past for your fitness.

Also, keep away from the Lycra!

Road trips are also good, get out to different trails and places and see different things.

Good on you mate, getting out there and enjoying yourself is what it's all about. I hadn't ridden in 15 years when I first got back into riding and couldn't believe how much it hurt! Good news is it does get better as you keep plugging away.

I only get time to go mountain biking on weekends, but I found a quick blast along local bike trails or on a trainer a couple of times a week really helps the legs get into condition a lot faster.

Trainers such soooooo much when your on one but it’s worth it.

I clearly remember my first ride back from a very long hyatus. Same was only a few k's but I live at the top of a hill.
Got back inside the house and collapsed on the lounge floor for about half hour feeling like I was going to die lol.

The fitness does come along quite quickly if you keep at it regularly.

Strava was also a big driver for me in the early days, just watching the ride distances creep up and checking out the maps of all the places I'd ridden.

where about's are you based,
heaps of good peeps on here can give you the good oil on local tracks and events.

Go nooob! Just get the lycra already. We all know you want it.
A

fatboyonabike said:
where about's are you based,
heaps of good peeps on here can give you the good oil on local tracks and events.
Click to expand...

South-Central end of Canberra, such that Pine Island, the Murrumbidgee and Lake Tuggeranong are all within a 15 minute lazy pedal for me. There are some nice dirt riding trails in all those reserves nearby and I’ve got a real good connectivity to the bike paths from my place.

At this stage I really am just focussed on getting to the point where a ~20km loop doesn’t make me think I’d rather be dead. 10km is steadily doable at the moment.
A

A quick lap around a few ponds and I finally crack the 20km/h average speed. Yeah that’s a big deal to me!

Get yourself Trailforks, that's a good way to find trails near you.

T-Rex said:
Get yourself Trailforks, that's a good way to find trails near you.
Click to expand...

Thanks for the tip.

You're progressing well, keep it up. Bike riding is awesome once your arse stops hurting. Hope you've sorted that front rotor - a 203mm rotor changes braking from a suggestion to an instruction (from a 120 kg+ rider who found 160mm front and rear scary on any real downhill).
A

Yeah I’ve ordered the bits to go up to 180mm - the max recommended size for the forks. They’re somewhere in the air between Asia and here.

The Merida has that Shimano centrelock style rotor setup which makes things slightly more complicated. I’ve got to book it in for its first service this week, get the spoke loosening sorted and the rear wheel trued because of that.

Don’t think the brake bits will arrive in time...

Hey buddy, good move on getting mtbing. Doooont do the Lycra, no-one needs to see a middle aged man's lower parts, well, almost no-one, photos or it didn't happen
A 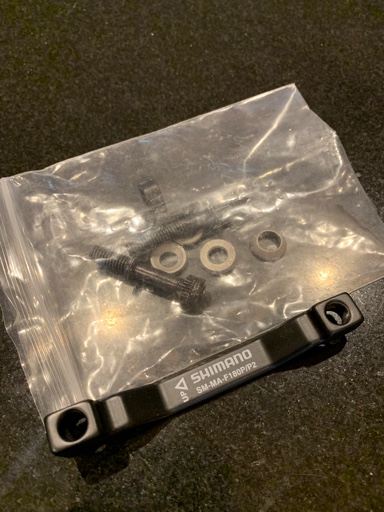 The caliper bracket/spacer turned up today. Looks genuine in the inclusions and finish quality. I surmise that the AliExpress sellers are probably dealing in OEM parts or sores inventory which doesn’t have a retail packaging element.

@AaronM, stop right there - what’s all this talk about being middle aged? Over 40 is when you need to consider being age-agnostic; essentially live in denial. Fifty is the new thirty!

And don’t waste your money on lycra, just use body paint - you can’t tell the difference and it’s much cheaper.
A

Feeling pretty good. Set out to do my real simple ~9km loop this morning and instead decided to mosey around the big lake. Despite going a very pedestrian friendly pace around the busy bits I still kept an average of 20km/h.

Might have to thank a couple of persistent Magpies for that.

In even better news, after making lifestyle changes from 2012/2013 I dropped about 40kg down to the low-mid-nineties in 2016/2017. Unfortunately it’s been a bit of a depressive 18months for me and the weight has climbed back on (part of the bike motivation was to get more active to shift it).

It’s just on 4 weeks since I got back from drinking unlimited free beers in the Marriott Kota Kinabalu Club Lounge and I’ve easily dropped 2kg of weight. Tie this in with the ability to ride 15km at 20km/h instead of 5km at 12km/h and I think I’m on a good path.

The black dog is still kicking my arse every minute of the day, but now the mutt has to get out and run alongside the bike with me.

I've always found a good ride is the best antidote to a shit day!
A

I’m not finding that. I do find that the distraction of being in the scenery puts me more “in the moment” as opposed to “in my own head” for the time but it’s neither lasting or 100% blockout.

Took my wife out today as she’s been interested in getting back on a bike as well. She’s ordered a 2020 Merida Crossway 100 Hybrid.

I now suspect that she’ll very quickly eclipse my pace around the bike paths etc given her bike is more suited, but hopefully it helps her chase down some fitness goals too.
You must log in or register to reply here.
Share:
Facebook Twitter Reddit Pinterest Tumblr WhatsApp Email Link
Top