You can't have the competition running off with a 38mm fork and not have something in response, now can you.

A hub with CARTRIDGE BEARINGS!

Oh - and another chainring standard...WTF??? 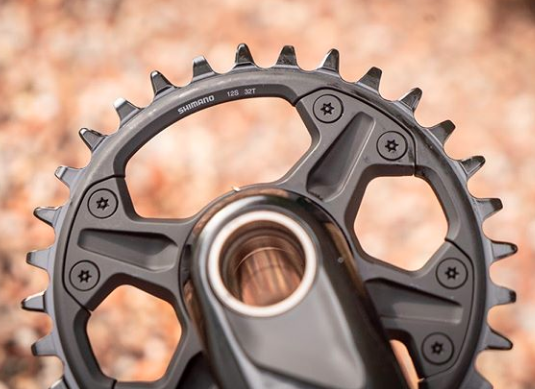 Oh - and another chainring standard...WTF???

Why would they move away from cup and cone?

Zaf said:
Why would they move away from cup and cone?
Click to expand...

Even though the ring would be easily replaceable - chances are they'll only be getting sold as a spider-less chainring (ie: assembly):

"Being the same spider-less fitment means you can also run chainrings from the SLX, XT or XTR range "

Even my XT chainring (assembly) had screws on the inside where you could replace just the toothed ring, but I bet I won't be able to buy them separately...
T

The convenience of a cartridge bearing is great; and quality of cartridge bearings these days is hard to go past. But Cup and Cone really does knock them out of the water especially in a wheel application (bigger bearings, better at handing lateral loads, less resistance, etc).
I really wanted to run Shimano hubs for the last few wheel builds I did, but had a lot of trouble finding them in stock in boost spacing, and then also couldn't find a lot of the flange numbers for them either. A perfectly tuned cup and cone wheel is just a beautiful thing!!

I forget the brand that did them, I feel like it might have been Paul Components, but there was a really nice set of cup and cone hubs that also had a replaceable race for the bearings. The one major drawback of the Shimano design is that their bearing races are integrated into the hub shell, so if some numpty over tensions the hub or doesn't maintain them correctly, you pit and write off the entire shell and will require a rebuild. That said, it's just a little more fiddly maintenance wise than cartridge.

That said, the pre-load settings that Syntace and the early Newman hubs offered also made those cartridge bearings run quite efficiently. Newman pulled that design because people still couldn't set it correctly which caused premature wearing on the bearings. It's almost like it's the end user that makes a great idea fail, rather than the idea itself.
S

Years ago I had some Fulcrum (Campagnolo in other words) MTB wheels. They used a 19mm axle and cup and cone bearings with everything replaceable. Fantastically low rolling resistance. Like you say @Zaf , its a shame Shimano did not make the races replaceable.
D

SummitFever said:
Years ago I had some Fulcrum (Campagnolo in other words) MTB wheels. They used a 19mm axle and cup and cone bearings with everything replaceable. Fantastically low rolling resistance. Like you say @Zaf , its a shame Shimano did not make the races replaceable.
Click to expand...

still got some campy neutrons, rolled past another guy the other day, he’s heavier & 5” shorter ..left him for dead, swee =t campy hubs