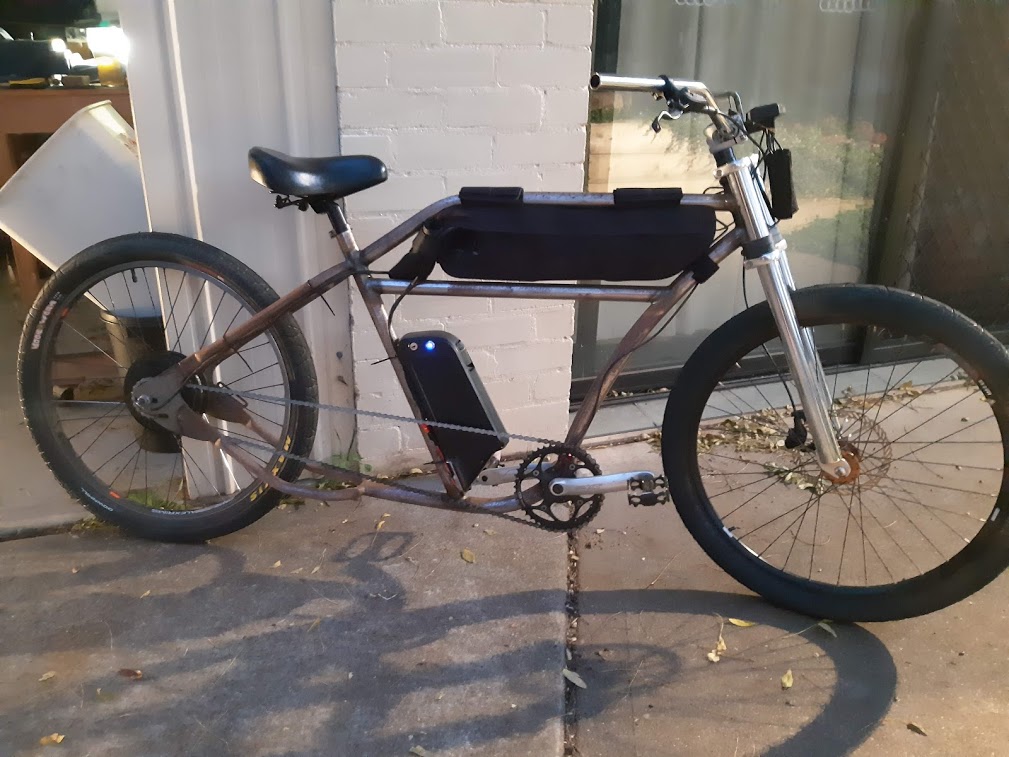 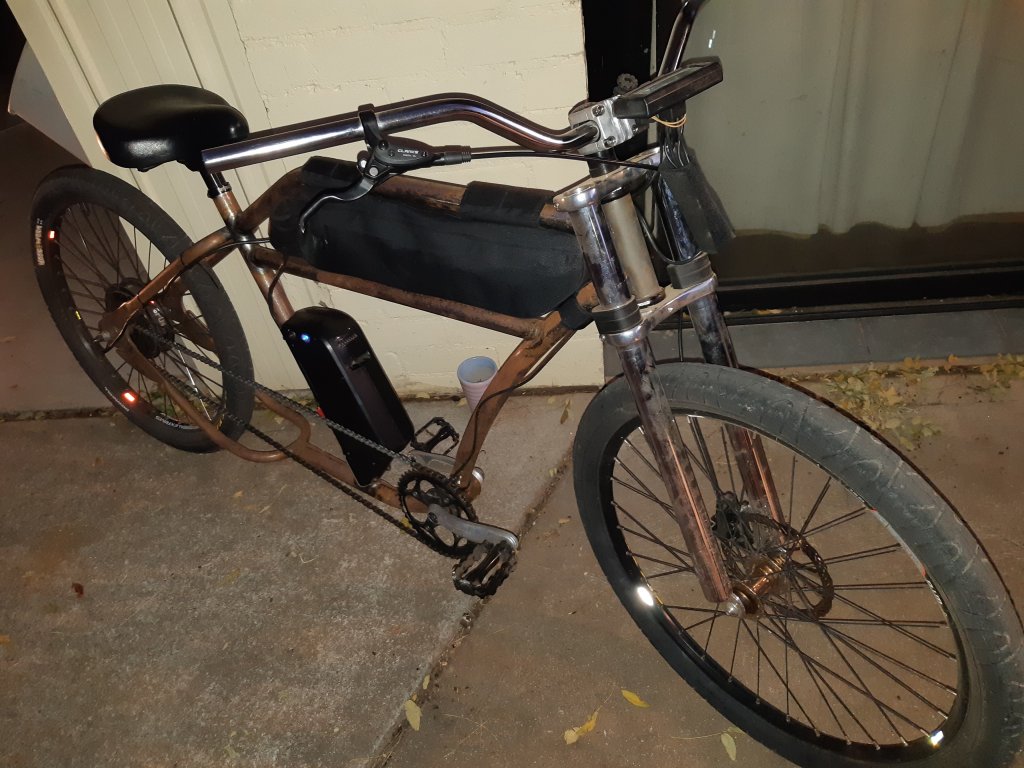 This is my custom e-board tracker I've been working up for quite a while. I had the e-kit on my old Mongoose hardtail as a commuter kit but it just wasn't that great to commute on, I always felt like I had to be giving it stick on the MTB and make fast commutes. 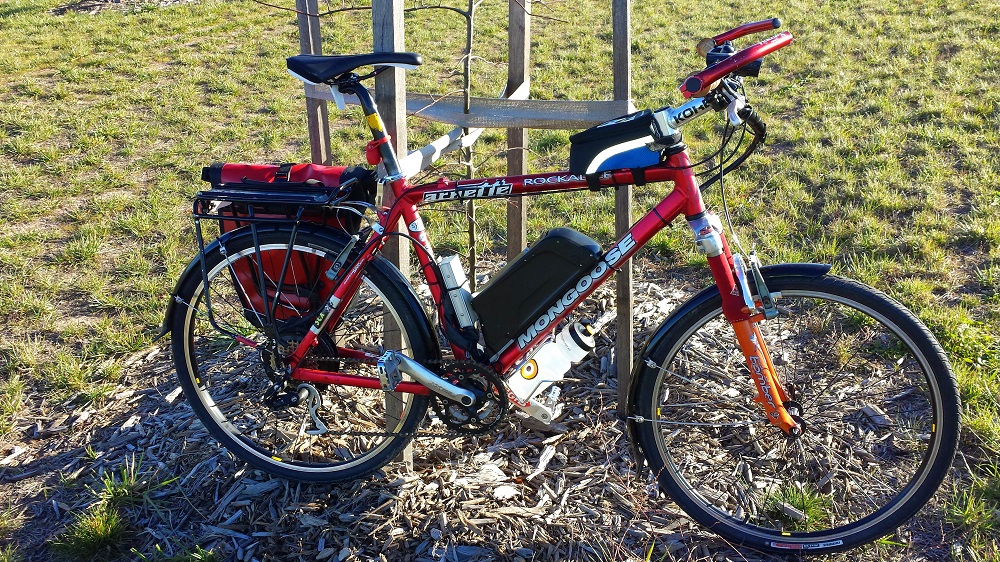 So I've been cobbling the new one together out of a new frame and bits I could find and bits my mate had ordered from Ruff Cycles when he built one a few years back. His is so much fun to ride and I felt like this would be a much more fun way to get to work or the shops or just cruising. The kit was about $1300 years ago (it's done a couple thousand k's by now) and the bike has cost about $600 to build so far, I expect to keep it under a grand.

I got it up and running with the electrics last weekend, was great after about a year gathering the bike bits. The temporary parts will be changed, they're just to get it up and running until I have budget to upgrade them. It should be properly rideable this weekend.

Near future plans are:
No idea what fiinish I will put on the frame, the natural rusty rat look is fine for now.
Last edited: Thursday at 11:45 AM

Name it the "Rusty Trombone"

If you let it go long enough and spill enough beer on it a proper coating forms... 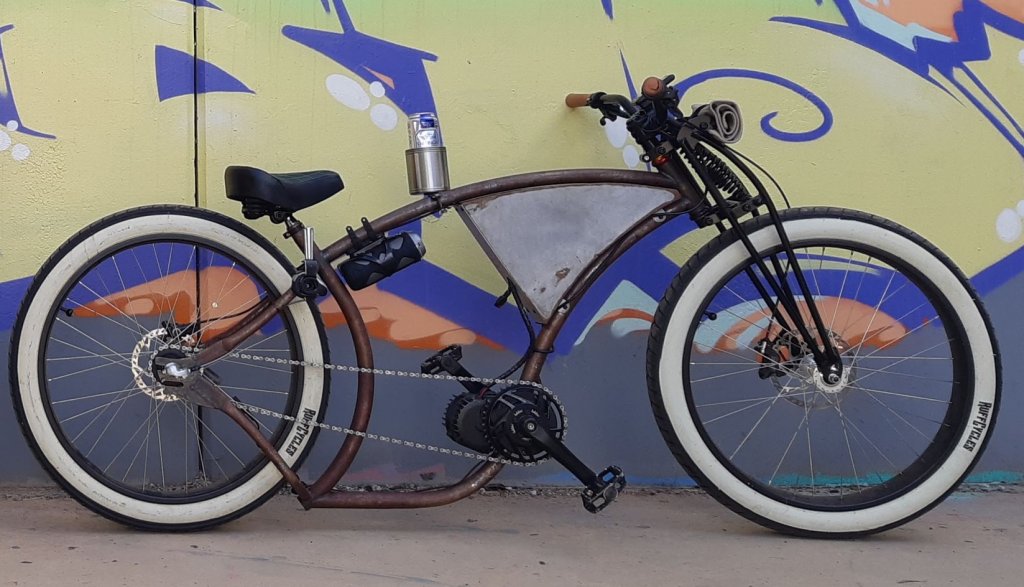 This is awesome to the power of max!!! I'm in the process of designing a frame just like this to build. I think I'm about to do my license for a year so need wheels to get to work.. BTR's are an amazing shaped frame, I'll be using a 1500w hub though.
With the BB so far forward, is it comfortable to peddle?
L

In a perfect world I'd have this, but I don't have hundreds of thousands of moneys. So an E-pushy version will do for now. 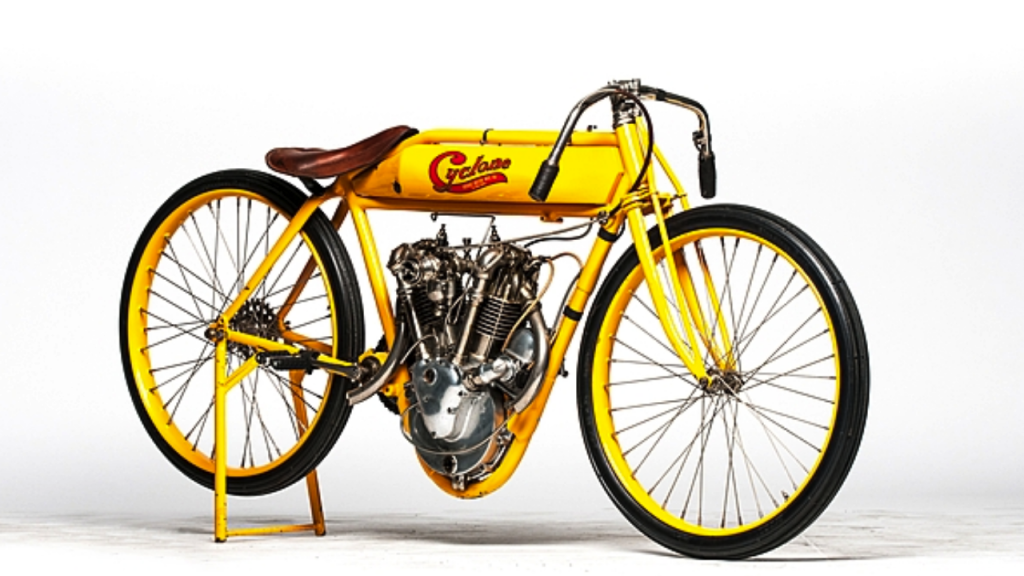 latheboy said:
In a perfect world I'd have this, but I don't have hundreds of thousands of moneys. So an E-pushy version will do for now.
View attachment 363264
Click to expand...

Wasn't watching this thread. For pedalling, I haven't done much yet on mine, but it's pretty comfy to ride my mates which has a similar leg reach. His TT reach was a bit longer, and he ended up reversing his stem as he's not as tall as me. He's done a 70km day on it and said it was good for that.

We put the short cranks on over the weekend after much confusion with neither of us having put one piece cranks on for ~30 years. Even with those the pedal clearance on the front tyre is still tight, but the ground clearance is better. And now the chainline is all messed up and will rub slightly on the battery. I should be able to move it over on the cassette body and deal with a slight angle in the chainline. There isn't enough thread on the cranks to space them out as far as the old ones were. We can also notch the battery holder so it will offset slightly and hopefully it is enough.

My mate has shredded the pedals and the low tube behind the BB, he's going to fit a skid plate because it can't even get up a decent footpath entry and not bottom out. Mine won't have that issue.

As for a 1500w hub drive, I've ridden a couple, one bike with a huge battery pack used to pull wheelies with ease off the throttle. It's just a bit much on a bicycle. If I did this over it would be a 750w mid drive. That's good for 45 with a decent pedal and gearing, will cruise along at 35 with ease and get decent range (up to 80km running it around 25-30km/h with mild pedalling) out of a standard pack like what's on mine. They also look identitcal to the 250w mid drive.

The bike is now in a proper rideable state and I've done some testing in the local area. Couldn't decide if I wanted raw steel or rust so split it down to the middle and made it half half. Took a couple of hours with a soft sanding block, wet and dry and a Koh scouring block with the fluid, it actually worked pretty well. Gave it some Mr Sheen to stop rusting and if I like it I'll leave it and get a better coating. 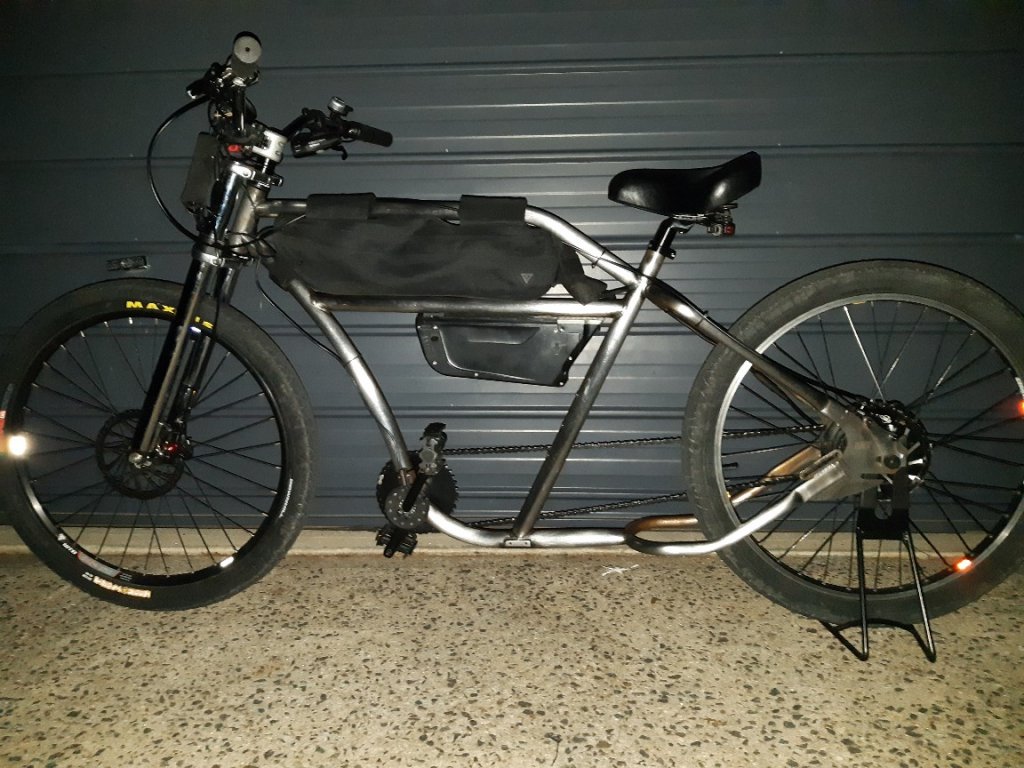 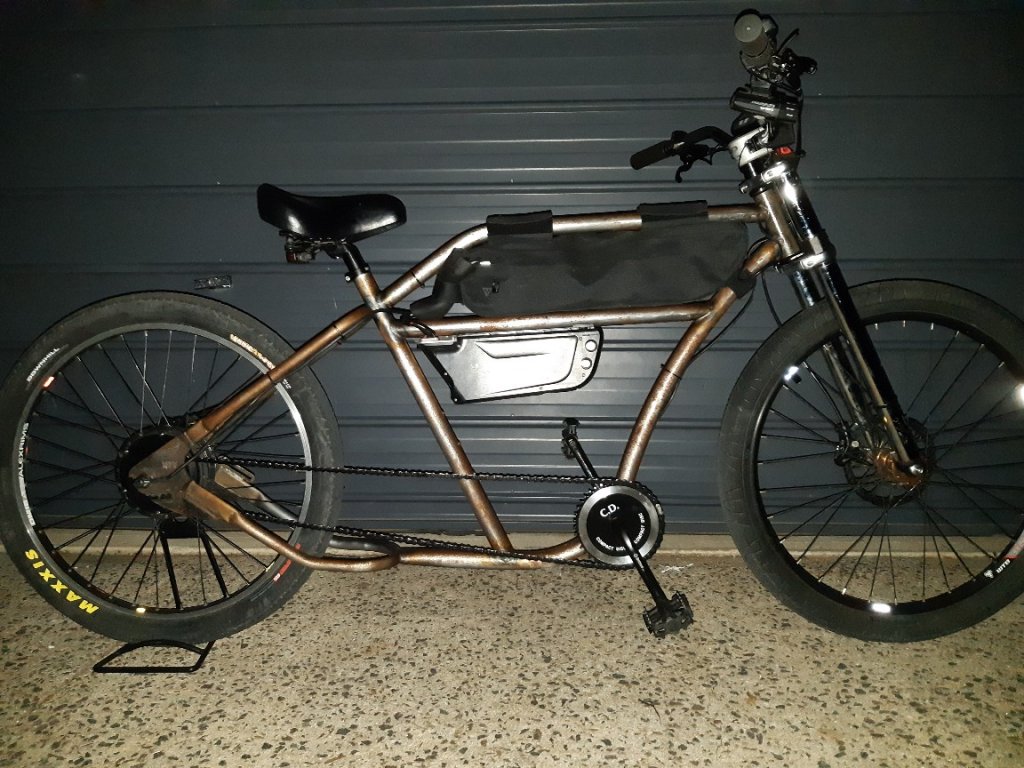 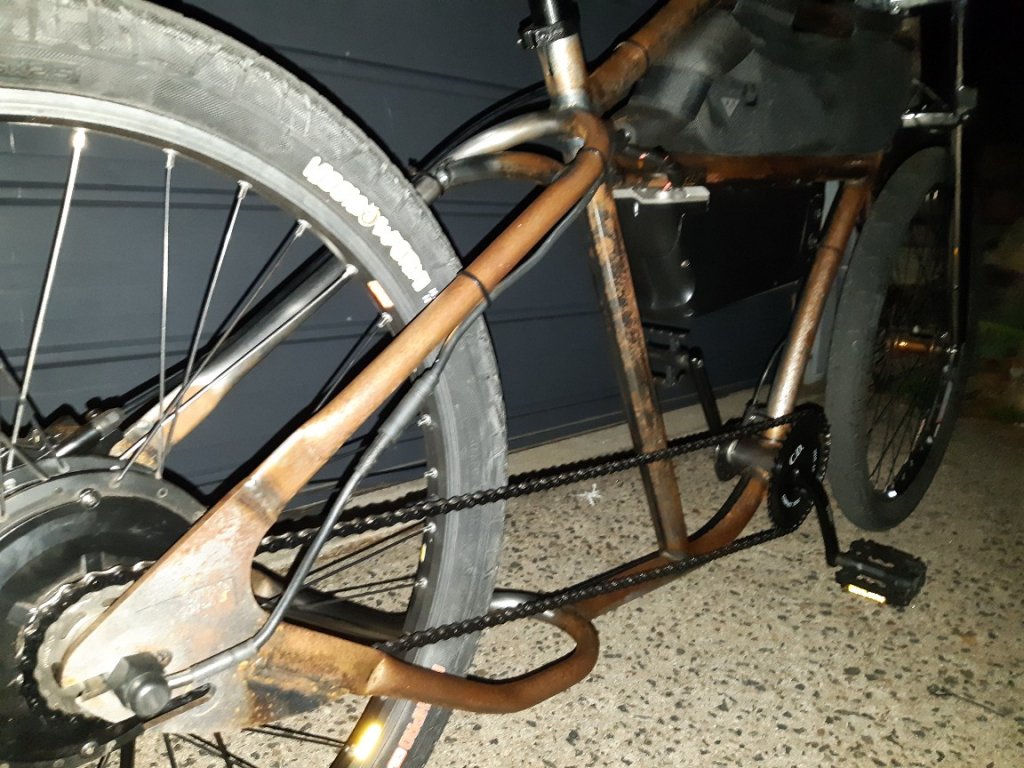 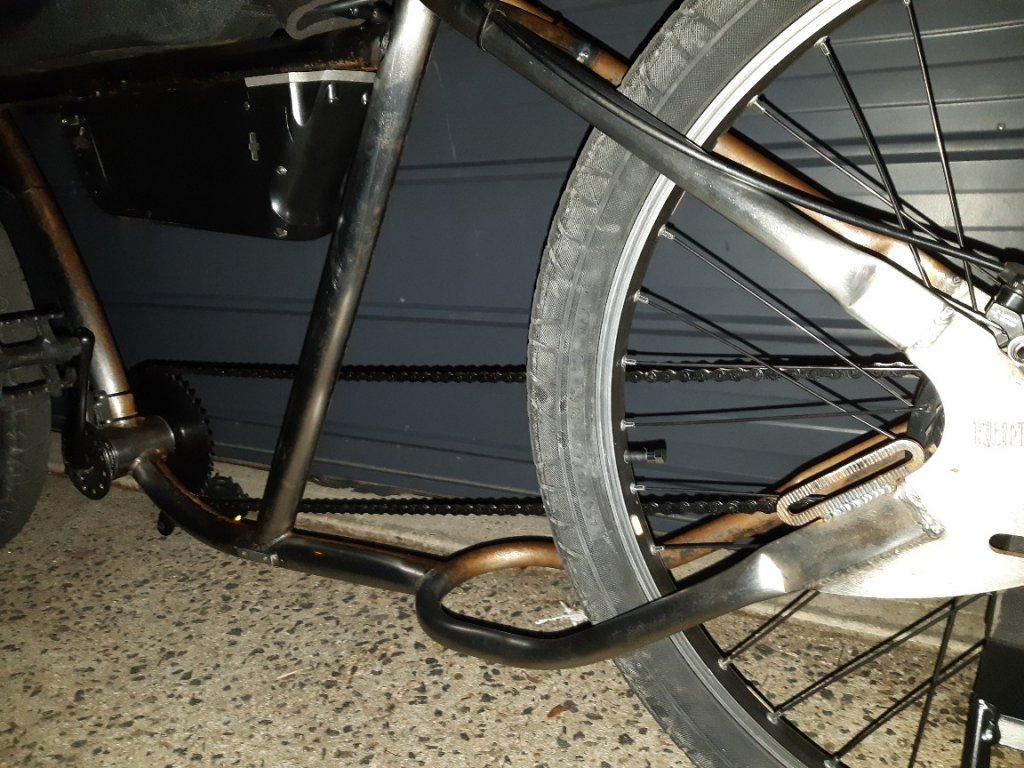 Should chuck some boxxers on it lol

Should chuck some boxxers on it lol
Click to expand...

I tried it with some free-ridey forks but they were way too high and the bike looked stupid with a long single crown front end causing a sloping top tube. It would need to be a low travel dual crown for it to work, maybe a Jr T version 1, anything longer (almost every other DH fork) will ruin the "geo" aesthetic

Took it for a decent spin of 20km on the weekend including hitting some steep firetail at Stromlo, much more battery draining than my 14km commute. Expecting about 40km range on the cruising setting, about 22km/h is comfortable with the gearing.

The Brooks saddle works for my butt and is pretty comfy already, can feel the indents from the sit bones after about 12km riding. The MKS pedals are really nice. It took a lot of messing about with settings to make it nice to ride and I'm still getting some lag when it goes below the speed threshold where it should put the power on again quicker from the pedal sensor. Seems a bit intermittent.

My brakes don't have sensors but I'm definitely going to get them, the old cable brakes had them but they won't adapt to the hydros. I went from 20t to 19t on the back and it's good, not too hard off the line with the assist, and a good cruising speed of 24km/h before it gets too much cadence. Updated the spec above and here's a few more pics. 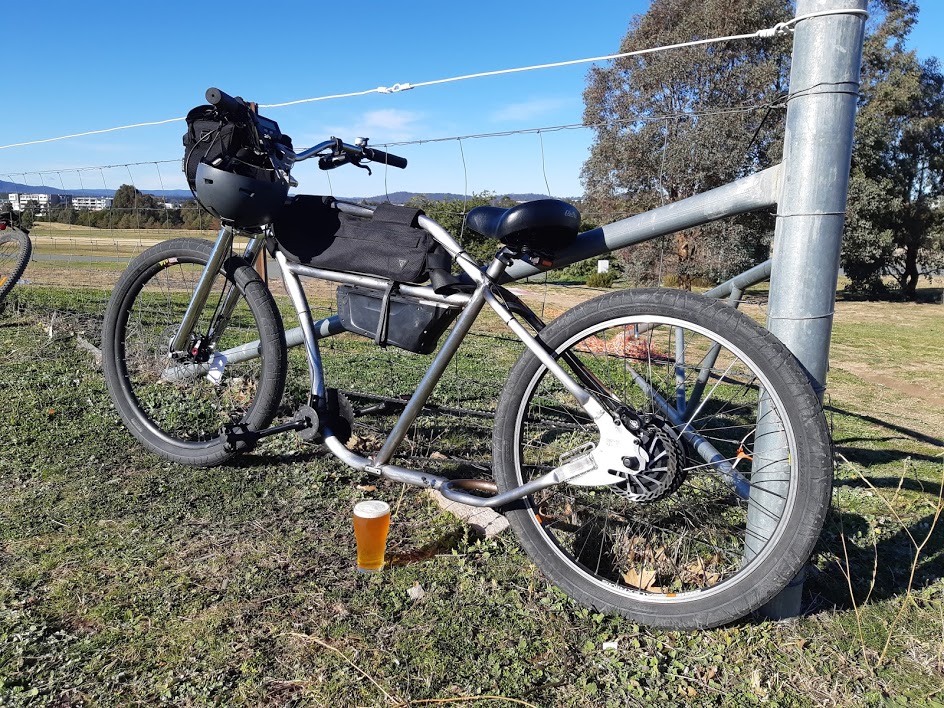 A heap of roos came across the track while I was there... Oh yeah I thnk the jury is in on full bare metal jacket, no rust.

Out of curiosity - What will brake sensors add that it doesn't do now?

beeb said:
Out of curiosity - What will brake sensors add that it doesn't do now?
Click to expand...