beeb said:
How's this pic of Vinales on corner exit! 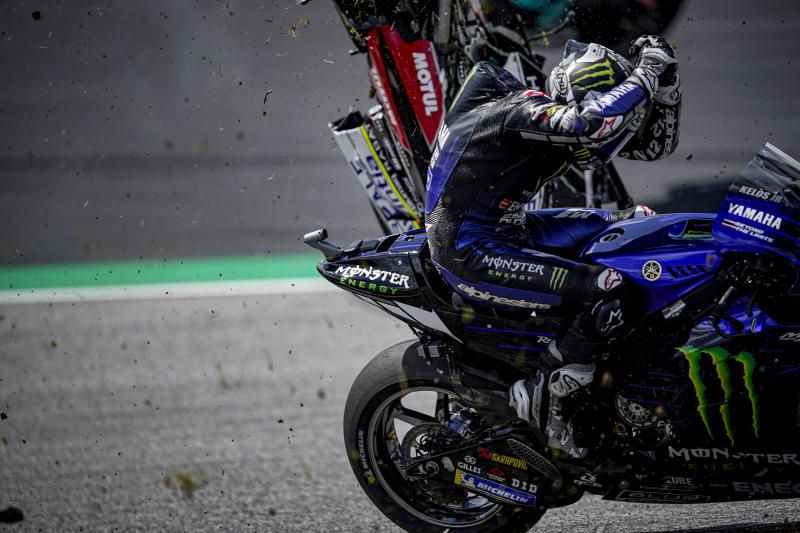 
I'm just catching up on this and wow!! So lucky those two, insanely close to getting cleaned up!
S

So who will win the championship now MM is out for 2-3 months?
This is the ultimate chance for Dovi to leave with a big F you to Ducati.
Can Quarteraro take it? Or will it be Maveric?.
That's the obvious 3 I'd put money on but anything can happen this year?
Got to love the twists of 2020 moto gp

Dovi is Mr Consistency. If no-one wipes him out, he should be in the box seat. If Miller can keep his head he should be able to be top 4 easily. Can't see Maverick winning it tbh, almost always a fizzer on race day despite regular free practice and qualifying speed. If Dovi does somehow end up injured (hopefully not!) and misses a couple of rounds, Rossi could even be a dark horse this season if all the young pups keep sampling gravel this year. I feel bad for him that Yamaha's engines are shite this year, I reckon he's riding the best he has in years! KTM has the pace this year, but with DNFs already, Binder being a rookie, and Pol Esparago filling in for M.Marquez on the aggression/lack of spatial awareness front I can't realistically see either factoring at the pointy end of the championship.

Hope Dovi gets it TBH, he's made the best of a shitty situation at Ducati for a few seasons now and always been a hard worker, would like to see him get up and shove it in Ducati's face as well, lol.
Last edited: Aug 23, 2020

^^ this - love the Pol lack of spatial awareness !
i d love Dovi to get up - he has the full package .
Dont count Rossi out tho , between him and Dovi - both Super experienced and have the mental strength.
the Young Guns have pace , but the racecraft is occasionally lacking ,
to win you have to finish
This year tho is a cracker !
S

He must be questioning his Future - last week ducks , this week has to jump off ....

Ps , my tips were shit - however it’s gonna be onnnn for the restart

Hard to imagine total brake failure being that likely, looked/sounded like it was possibly the clutch not disengaging...

Zarcooooo, can he start in the pack ?

Taka is on fire this weekend too , Honda needs more powa tho

Well , how about that !
motogp delivers !

So good! Nice to see some luck in his favour finally too.
S

Brilliant once again. Good weekend for the Aussies with Remmi on the podium as well

At work but I caught the last few laps of MotoGP and also Vinales bail out - hectic !
S

I just watched this race again. There hasn't been a boring race this year. I don't want to jinx him but Miller really is riding well this year.
M

I wonder how many engines Vinales is down to now ... Apparently Morobidellis engine from last week is still OK to use suprisingly. Should be interesting for the rest of the season

MrLazy said:
I wonder how many engines Vinales is down to now ... Apparently Morobidellis engine from last week is still OK to use suprisingly. Should be interesting for the rest of the season
Click to expand...

They suggested in the commentary that was his last unopened engine in the bike that Torpedoed the air-fence. I think the said they can open them under "safety grounds" but it incurs a pit-lane start for each engine.

Cal Crutchlow undergoes arm pump surgery, and post pics and vids of the surgery on his Instagram.

Probably best to not look if you're a bit squeamish!
S