Something is definately not right 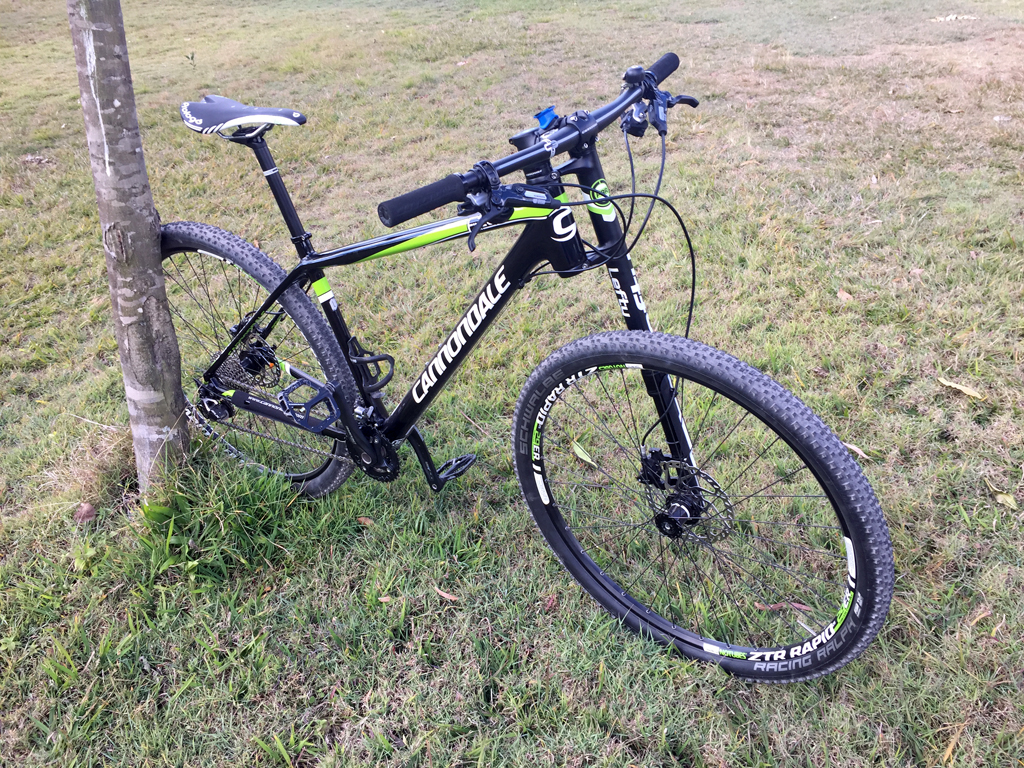 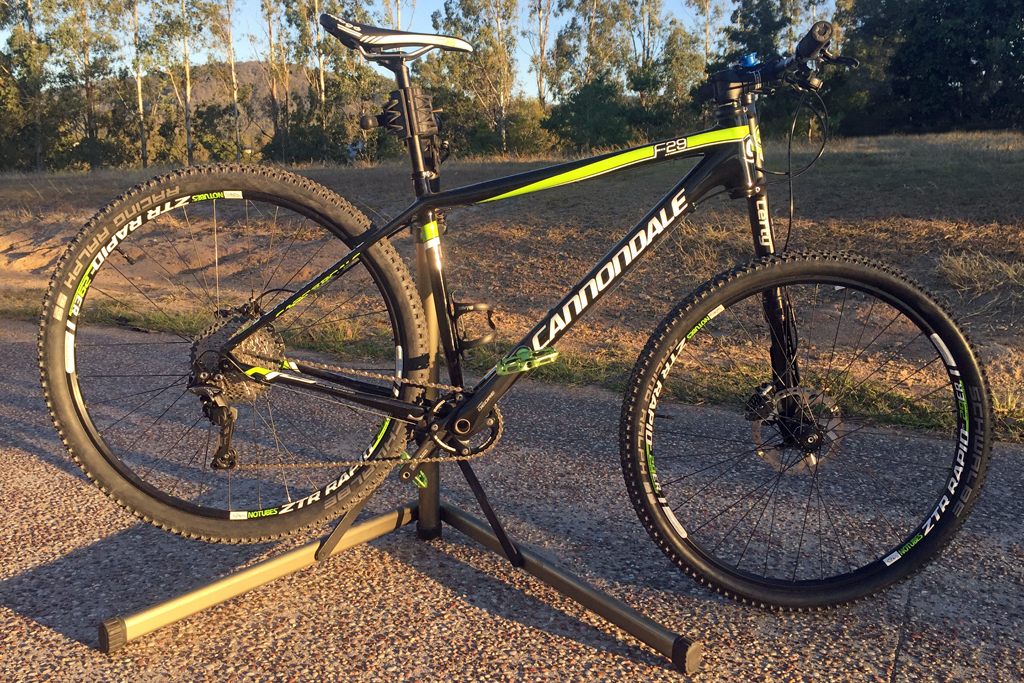 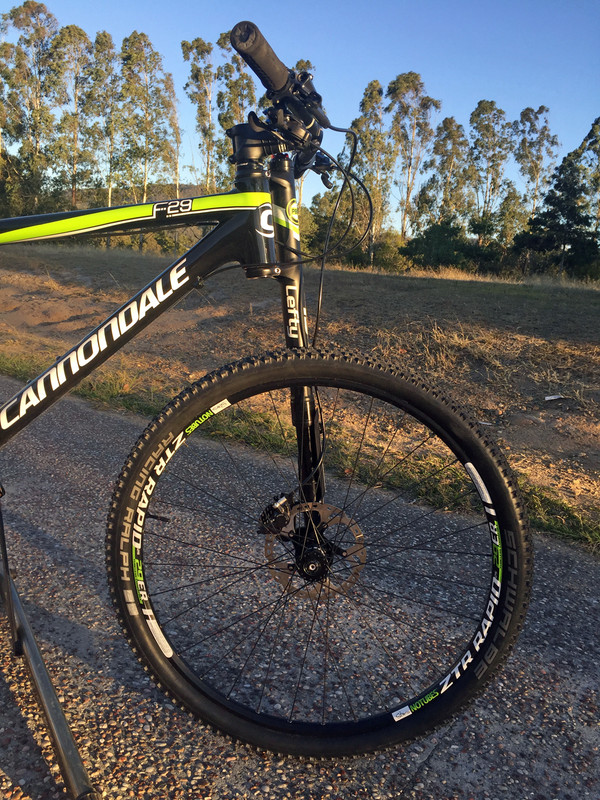 So the background to this is the very first dually I bought was a Cannondale Rize with aluminium frame and conventional fork. I test rode one and then tried a couple of other bikes at the same price point (Spec, Norco etc). The Rize won because the shop was prepared to do some swapping of parts. I went back to have another ride before dropping the cash and the bike I test rode was sold but the next model up with the lefty was available. I rode that and decided I wanted a lefty. No because it was so much better than the Fox forks but because of the looks people gave me riding on a bike that was obviously missing something important. Except the Lefty and a few minor spec increases meant the asking price rose about $1k. Ah no, the lefty isn’t worth that.

Fast forward and the USD fork on the Muru became too worn and clunked and bound when it was ridden. Spares were an issue so a new fork was needed. While investigating the options it was clear that 29er lefties were being adapted to suit fatbikes. The Bluto meant a new front hub anyway so I am in! Except when I totalled up the cost of admission is what about $2k more than throwing a Bluto on. Not happening part II.

#2’s mate was getting back into riding and I loaned him the XTC I had and he and #2 (on the Bronson) cranked out a couple of rides and I was asked if I would sell the Giant. I wasn’t really planning to but let it go for a loss after upgrades which is how we all do it, well nearly all. So I started looking and this new old stock F29 came up at the shop who did the work on my Muru. They were asking a fair bit more than I was interested in paying especially given the meagre level of specification on some of the components. Anyway after the show holiday up here I wandered in and did some negotiation. Still more than I wanted to spend and I had upgrades to do but it was probably my last opportunity to grab a lefty. The spec level stock is very odd with Deore cranks and brakes and front shifter and the original price was $4k! You really have to pay to join the lefty club but I was also a bit disappointed with the other things I could get for the same money. So the Cannondale got the nod. Buying a good second hand bike like that XTC is always better.

Part of the deal with the sale of the XTC was that I would throw on some flat pedals I had spare and reuse the Raceface Atlases that were on it and also I would swap the brakes from the F29 onto the XTC and take back the M785 XTs that were on that.

Being NOS it is effectively a new bike with new bike warranty and that means lifetime on the carbon frame which helped get it over the line.

The Muru has gone back to 2x10 running the chainrings that came with the F29. Wife’s bike has gained the new 10 speed SLX rear derailleur and cassette and the Hope enhanced 10 speed has made its way to the Muru with the One Up enhanced derailleur. The SLX shifters off the F29 are on the Muru with the XT 11 speed bits going onto the Cannondale. The stock Deore brakes which I could have lived with were swapped out some time in the past for the DB-5s. The shop would have done a swap back but had nothing that they were prepared to change and I think he was feeling a little unloved at the price he accepted for the bike. At the moment the brakes off the Bronson are on the Cannondale and when the M8000s I bought off @Oddjob arrive I will probably put those levers on the Bronson with the XT 4 pot / XT 2 pot calipers that it had and keep the XTR race levers on the Cannondale. I did have a generous offer for Hopes on the Bronson but couldn’t make them work with the dropper lever.

How does it ride? Really just like the XTC though it does roll better which is likely a difference in tyres. The RR’s were a pain to set up tubeless, I will not mention that I dropped the wheels off day one after a 6km ride and pulled the tubes only to find I had no sealant and no tubeless valves so the tubes went straight back in.

Not many km yet though I have to say I will ride this harder than the XTC because it just feels a bit stronger.

Dont you find it weird with braking between the 4 and 2 pot?

Kink of the mountain

mas2 said:
Dont you find it weird with braking between the 4 and 2 pot?
Click to expand...

Can we GoFundMe a second fork leg?

Top stuff, the lefties are are mad as, seem to work so well. If you go carbon, go Cannondale. Great bike for a 29r

mas2 said:
Dont you find it weird with braking between the 4 and 2 pot?
Click to expand...

Nothing that I have noticed. On the back I have plenty of brake and front same.

Ah, Hopes. So very nearly. Too classy and powerful for me though. I needed 4 pots all round on the muru but that is inertia.

moorey said:
Can we GoFundMe a second fork leg?
Click to expand...

With the Rize you could see the lefty while riding, obviously it rides like a conventional fork. With this the stem is so short and the crown so wide you cannot see it is a lefty.

The new carbon lefty is a single crown... That really is a head fuck.

Staff member
Couple of updates. Calipers now M8000 single pots front and rear, finned metal pads up front, resin rear. And cranks changed to M9020 XTR with a Wolf 34t egg ring. Only change left will be to change the XT bar mounted shifter to ispecii. Changed the bars to Fatbar lite for some extra width.