FigBo0T said:
Yep. And we're Australians. My big issue with Trump is that it isn't economical to buy shit from the US any more.

bear the bear said:
Trump cleared? Please explain?
If my understanding is correct, he has now officially been impeached and this cannot be cleared/ reversed.
The vote in the Senate is whether to remove him from office, and given the partisan nature of the Senate that is not going to happen.
Click to expand...

Think of it like this.
Son wants new bike.
Dad says sure.
Mum then overrules.
He ain’t getting the bike, but it will be forever remembered that dad said yes, and it did nothing.

That’s about all 98% of people remember.

I still love that Trump hates the black mark against his presidency
Last edited: Dec 27, 2019

IMHO... we remember Nixon for ‘watergate’. His impending impeachment over it is forgotten by most. Clinton’s was very salacious. Everyone remembers Lewinski, though the affair wasn’t why he was impeached, and it is far less thought about by most.
Last edited: Dec 27, 2019

...All that said, Trump will be remembered for his handling of the matter far more than what he did that led to it. I think they went with the weakest of articles to impeach on, and has virtually ensured its failure in the senate.
The Dems likely didn’t push for campaign finance violation (that everyone around him is going to jail for), or any one of a number of actual crimes, as I think most of them know they’re just as guilty of having done the same, and don’t want theirs dug into by a vindictive Trump.
Most people have no idea what the 2 articles he’s being impeached for, actually mean.

Funnily enough there's not too many headlines in the SMH about this topic (or bush fires or our current PMs holiday abroad), I've fallen behind in A Closer Look so I think it might get a workout tonight.

Aus hears little...and usually wrong news on Trump. It resembles nothing of what is covered in US news podcasts.

moorey said:
IMHO... we remember Nixon for ‘watergate’. His actual impeachment over it is forgotten by most. Clinton’s was very salacious. Everyone remembers Lewinski, though the affair wasn’t why he was impeached, and it is far less thought about by most.
Click to expand...

I’d impeach the cuss outta that.

nzhumpy said:
Funnily enough there's not too many headlines in the SMH about this topic (or bush fires or our current PMs holiday abroad), I've fallen behind in A Closer Look so I think it might get a workout tonight.
Click to expand...

Not sure if you know much about Cenk Uygur?
I’m a huge fan, have been for many years. He’s a progressive, and running for Congress. Even the Dems (and every single major news source) are trying to sabotage him by trawling through 20 years of podcasts and interviews. They either intentionally misquote, or being up things he said back in college and long ago retracted and stated he’d made mistakes, and believed incorrect things back then.
Famously, he interviewed David Duke, ripped him a new one over his racism, then when Duke said ‘I’m not racist’, Cenk sarcastically said, ‘no, of course you aren’t’
It was simply reported as ‘Cenk says Duke isn’t racist’. NYT was the first to air this, then refused to retract it, despite knowing it was 100% false.

moorey said:
Not sure if you know much about Cenk Uygur?
Click to expand...

Heard the name, but that's about it . American politics is a minefield if you don't keep up to date and I haven't got a lot of spare time to look at the screen (this place takes up most of that). Thanks I'll have a looksey about.

Edit: a quick Wiki states "Cenk Kadir Uygur is a Turkish-American broadcaster, lawyer, businessman, columnist, journalist, activist, and political commentator. Uygur is the creator of The Young Turks, an American progressive political and social commentary program" and he's running in Cali, it's no wonder they're trying to slander/smear campaign him, he's probably smarter than whole other bench...I like the cut of his jib.
Last edited: Dec 19, 2019

As good a time as any to hear Trumps thoughts on Pelosi in in an interview with Wolf Blitzer in 2008.

TRUMP: "Well, you know, when she first got in and was named speaker, I met her — and I'm very impressed by her. I think she's a very impressive person. I like her a lot. But I was surprised that she didn't do more in terms of Bush and going after Bush. It was almost — it just seemed like she was going to really look to impeach Bush and get him out of office, which personally I think would have been a wonderful thing."
BLITZER: "Impeaching him?"
TRUMP: "Absolutely. For the war, for the war. Well, he lied! He got us into the war with lies. And, I mean, look at the trouble Bill Clinton got into with something that was totally unimportant, and they tried to impeach him — which was nonsense. And yet, Bush got us into this horrible war with lies — by lying. By saying they had weapons of mass destruction. By saying all sorts of things that turned out not to be true."

This could be significant.

2 words.
‘Well’ and ‘duh’. They’ve been gerrymandering and purging voters for ever, as well as making it near impossible to vote in ‘urban’ centres.
https://www.huffpost.com/entry/trump-adviser-gop-voter-suppression-poll-watching-2020_n_5dfd46c5e4b0843d35fc2322

Well someone whispered something in his ear & now this disaster: 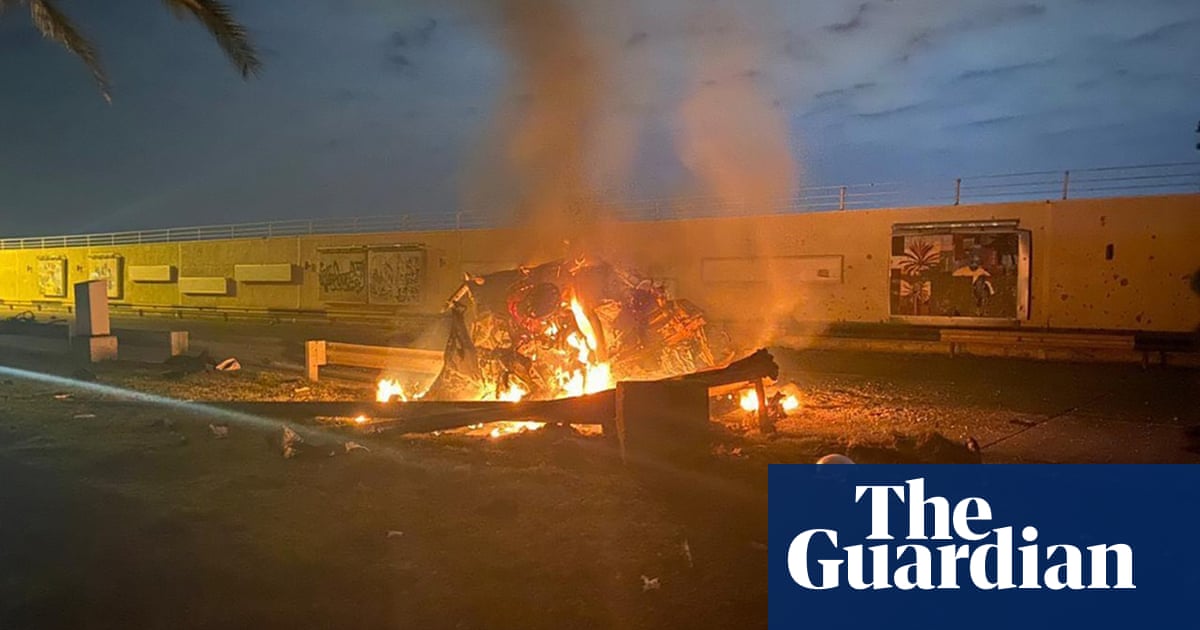 US orders 3,000 troops to the region as tensions rise following killing of powerful general Qassem Suleimani

Shit’s going to get real... 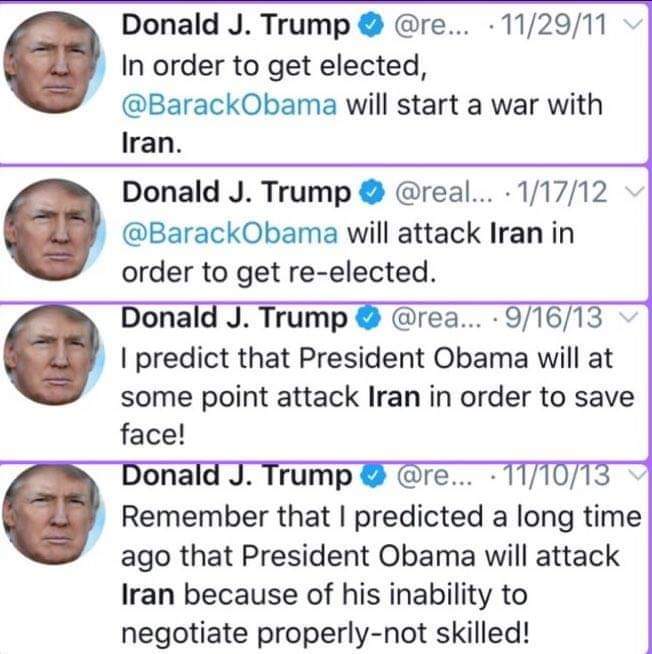 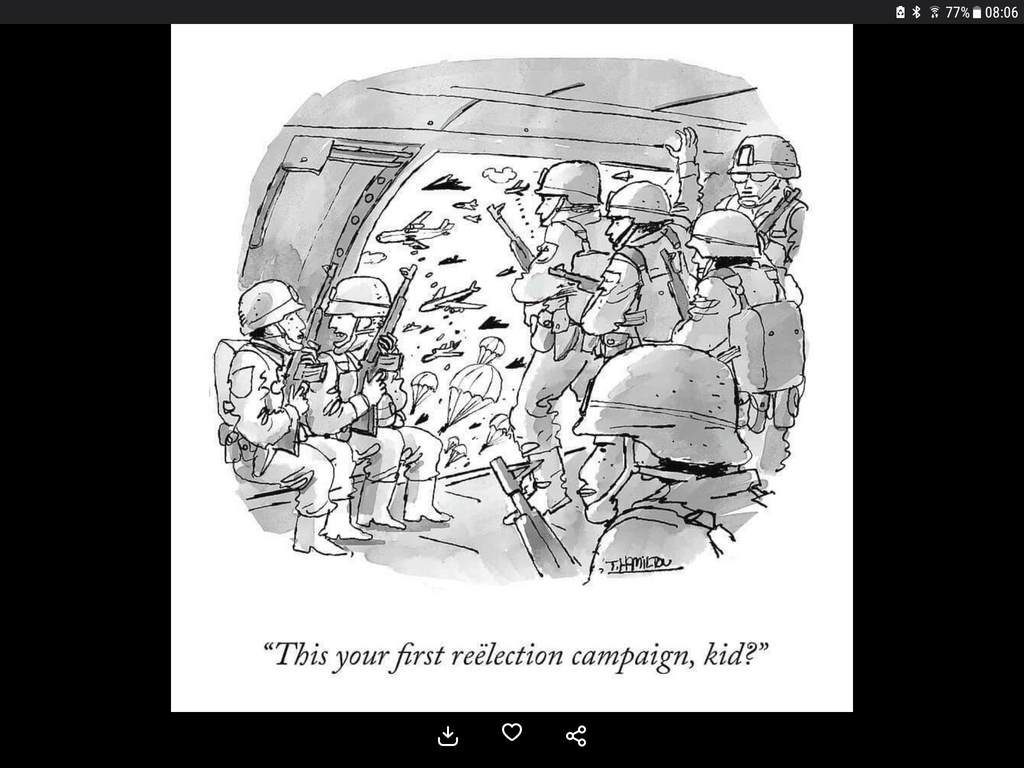 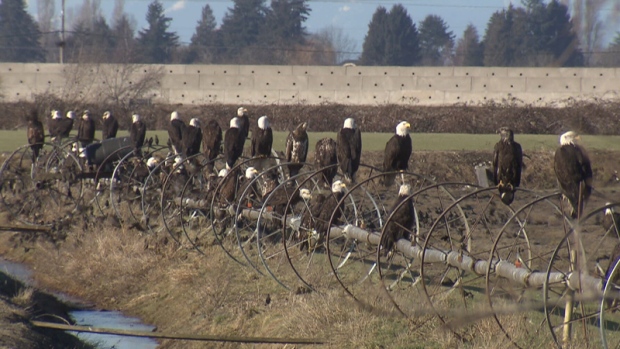 That's some crazy shit with Iran. The rest of the world is happy to sit back and pretend it didn't happen?

pink poodle said:
That's some crazy shit with Iran. The rest of the world is happy to sit back and pretend it didn't happen?
Click to expand...

That's an interesting statement... Here's the thing, if some country had smacked the shite out of, say, Mark Esper (US Secretary of Defence) who do you think would join them in retaliating....

p.s. Supreme Leader Kim Jong-un, Australia is already on fire, save you Nukes for those countries currently not on fire.... Oh, and Scomo can be knocked out with some harsh criticism from a goat wielding hippy....