I picked this up on Friday in an attempt to achieve the impossible equation of N-1. As a proponent of N+1 over the years I thought this would be worth a try.
So I culled my fleet down by selling my Intense Spider 29 and my Intense Carbine 27.5 hoping that the Norco could be the bike that is capable on roughish terrain but also pedals well enough to do XC style riding with.
I bought the bike from a shop that I didn't even know existed because they were the only people who had stock in my size, apparently Norco brought in very few units and they sold almost immediately. The shop build on the bike was shit, no grease on anything and the cockpit/cable setup is a fucking birds nest. I shouldn't expect better but I would have thought they'd take a bit more care.
The setup is currently stock except for 54T star ratchet, tubeless, seat and XTR pedals. I haven't put it on the scales but I'm guessing the wrong side of 13kg which is a bit of a shock coming off 11kg bikes
Anyway, I took it for it's maiden voyage last night for a very quick run up some fire trails behind my house - about 5km of steep climbing and descending. I've got the rear sag at 25% and although the traction is great it's certainly does not pedal well. I am comparing this to my two Intense bikes which are both lighter and have carbon wheels, so it's probably not fair but I know why they spec such a small chain ring on this thing. In comparison my Spider 29 ran 34T up front and 46T cassette and I seldom used the lowest gear, the Norco runs 30T/51T and it was certainly required. Descending is a different matter though and even though it's only got 125mm travel on the back it really is a very capable thing, not as poppy as my Carbine was but it jumps really well and is very stable. It's also not very quiet which I'm none too happy about but I'll have to spend a bit more time on the setup to identify what the rattle is.
I was initially sceptical about the Pike Ultimate thinking that it was a thin veneer of silver paint and a thick coating of marketing bullshit, but it's a pretty nice fork. Maybe not as nice as my custom tuned DVO Diamonds but the settings are literally set in the middle of the range so with tuning I'm sure they'll be impressive. I don't like the lack of a QR axle though, who uses a fucking 6mm anyway!
The XTR 12 speed is currently not my favourite with the shifter not working correctly, so I'll refrain from shit canning it until I work out what the fuck is going wrong. After riding for a minute or so in the middle of the cassette the lever fails to pull the cable and just goes to the end of its stroke so you end up pumping it (just like XTR brakes) to get some action.
The spec is strange on this bike, XTR drivetrain, E13 carbon cranks (no other E13 parts on the bike?), shitty X-Fusion dropper, shitty grips, shitty seat but Race Face carbon bars.
On the things to do list:
Specs:
Norco Optic C1 Medium - Carbon front/alloy rear
XTR Drivetrain
XTR Brakes (not any more)
X-Fusion Manic dropper 150mm
Race Face carbon bars
Norco branded stem
Specialized (eeew) Phenom carbon seat
Schwalbe Hans Dampf 2.35 Rear
Schwalbe Magic Mary 2.35 Front
Stans Flow rims on DT350's
E13 Carbon cranks
Pike Ultimate
Rockshox insert too many superlatives here rear shock 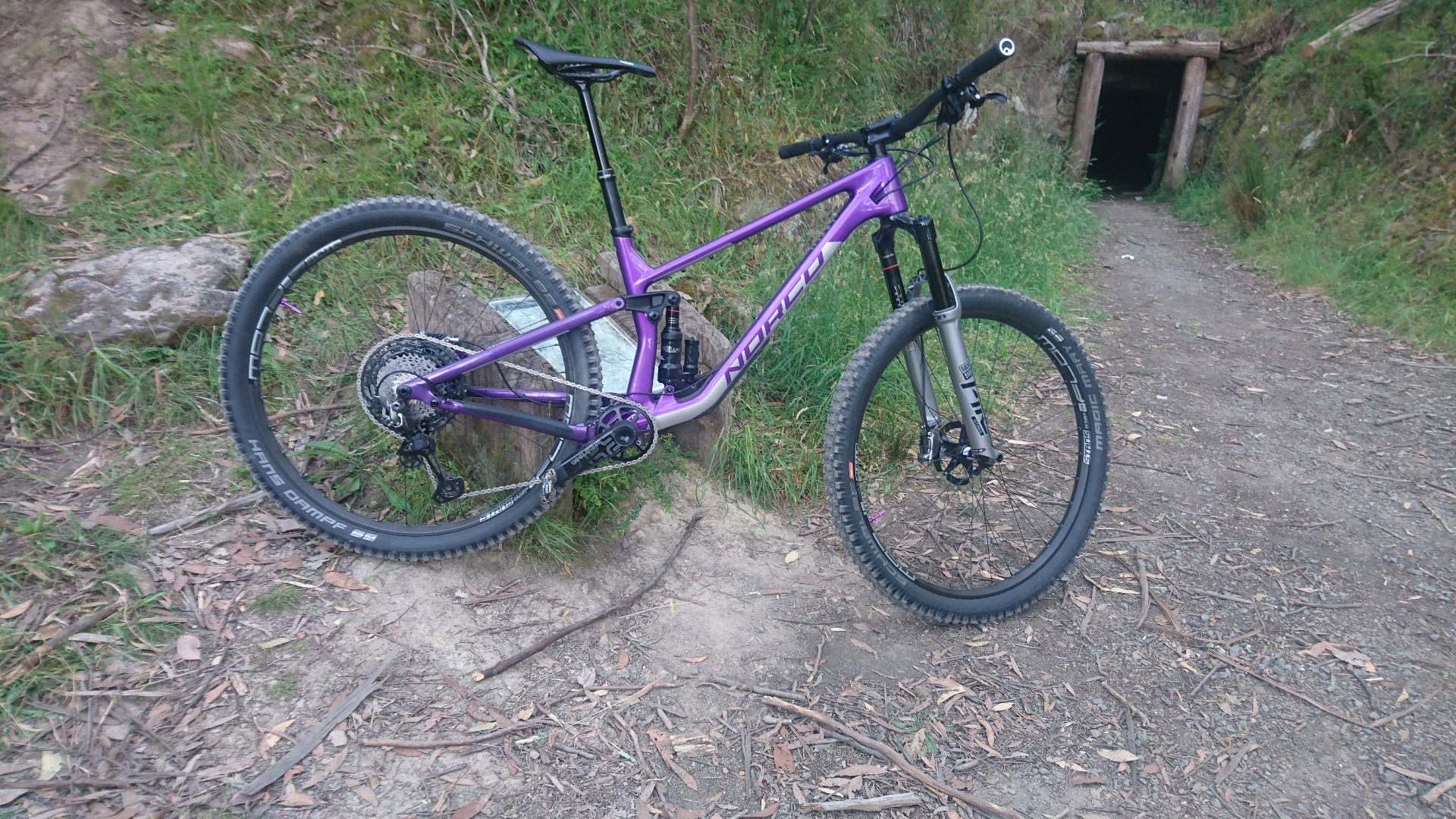 I think it's getting harder to get down to a 1 bike quiver, rather than easier. There are too many options and the bikes at either end of the spectrum are just so good now.

Hopefully this one comes good with a little more personalisation and some tuning to match.
D

i also saw this bike as a possible 1 bike solution, pity to hear it doesn’t climb well, is it the frame or rear which u think? does shock have 3 modes? i ask cos my new to me salsa redpoint 150mm climbs harcourt really well, very little pedal bob in the trail setting going up trk2, good grip in the open setting coming down2.
love the looks of this bike, purple gets me going
K

There's no lockout or three position on the rear shock, it's the Super Extra Special Downhill Ultimate Deluxe Superior Select Exclusive. I suspect it's all in the leverage curve, but I'll have to do more work on the tune.
I think most of my issues are based around the wheel/tyre combo, I usually have much lower rolling weights than this.
The purple looks great in the flesh

I'd be tearing it down and checking that there's grease/grip paste on all appropriate surfaces. Nothing worse then having a seized seatpost or bb 12 months down the road.

Sounds like a derailleur hanger problem. Check that its straight. The outer cable might also be crimped/kinked somewhere.

Tbh I doubt that the Norco is ever going to feel as sprightly as the Intense's. The fsr linkage is going to feel like a couch compared to a VPP under power and Norco build them tough/chunky.

My mate just got his sight A1...blown away by it....other than stock weight.
I personally don’t care about weight much, but need something that can climb OK for racing.

With the intermittent shifting - try clicking through to the smallest gear, then adjusting the cable at the derailleur end. ie: Make sure the cable is pulled fully through the outer sleeve or they can 'ghost shift' like that.

Yeah but owing by the list of bikes owned by the OP & his assembly observations he knows how to tune gears.

Seems like the XTR shifter is a bit internally fucked.
K

At this time of year I'm flat out with work, Christmas shit and children's sporting activities so I have spent zero time looking at the shifting problem. My test ride last night was after a Christmas thing in the semi darkness and I was a few beers down!
I'll sus out suggestion Beeb, thanks for the tip.
I'll buy a set of carbon wheels and see if that makes a difference.

That tyre combo is definitely aimed at descending, not climbing. Odd spec on that bike. You’ll drop a chunk, and roll better on another combo it that’s your thing.
Sounds like the select shock is an odd skimp on that level build.
K

CCDB Air you reckon? I thought the shock on it was supposed to be a good thing? They are $850 from Pushys, but I suppose price isn't always an indicator of quality.
https://www.sram.com/en/rockshox/models/rs-sdlx-uldh-b2
I'll run a more XC based setup with a wheelset weight under 1600g and run much lighter tyres which should make it accelerate a bit quicker.
I don't do too much serious jumping after losing an eye a couple of years ago, with no depth perception I struggle to stick the landings because I can't really tell when it's going to happen.

I think the DH shock should be an indicator of what the intent of the bike is.

Would seem it is a short travel downhill bike, rather than an all day trail bike, despite only being 125mm rear travel

komdotkom said:
CCDB Air you reckon? I thought the shock on it was supposed to be a good thing? They are $850 from Pushys, but I suppose price isn't always an indicator of quality.
https://www.sram.com/en/rockshox/models/rs-sdlx-uldh-b2
I'll run a more XC based setup with a wheelset weight under 1600g and run much lighter tyres which should make it accelerate a bit quicker.
I don't do too much serious jumping after losing an eye a couple of years ago, with no depth perception I struggle to stick the landings because I can't really tell when it's going to happen.
Click to expand...

CCDB would work if you have one lying around.

Ze germans also have DPX2s and Topazs for good prices and they work work as well.

hifiandmtb said:
Yeah but owing by the list of bikes owned by the OP & his assembly observations he knows how to tune gears.

I can tune gears, but I've still done it to myself once. It would shift up and down the cassette no problems, then next time through randomly just click but not shift (ghost shift was a bad description, it's more just nothing happens when you hit the trigger.) Pulled the inner through properly afterwards (it must've snagged on the edge of where the cable ferrule sits the first attempt then dropped in later under) and all was back to normal.

That shock seems like massive overkill for a 125mm rear travel bike. Probably too late now but given you are (or were) an Intense man the Primer is the closest thing I've come to a one bike quiver. Also what's the drama with the Manic dropper post? I have one on my Primer, and a Revive on the another bike, and to be honest I can't tell the difference between them in action, although I don't use the stock X-fusion remote.
K

Well this is disappointing to hear, my Intense spider is fked and the norco looked the goods..
Over 13kg with xtr spec is pretty heavy but considering my spider literally just fell over on to a rock and the rear triangle exploded, chunky might be better..
For those who know vpp vs horst link, horst won’t pedal as well?

Nah no such thing as overkill when it comes to suspension.

I too was hoping the new optic was a updated version of the previous xc-ish model (which obviously it is) but i didn't think they would turn it into a park bike. Their colour schemes are so "woke" it has turned me away from norco's after owning 2 of them.
O