Garth Dozer Roberts from Coffs Downhill had a chat with Jack Moir a few days before he defends his Australian National Championship at Bright in Victoria.

G’day Jack, 2018 is looking like a pretty sweet year for you in the racing world, what events have you got planned?
Hey mate, at the moment I have a pretty packed schedule: Full world cup series, Full Crankworx series, a few Aussie nationals and a few EWS events if they are conveniently placed in with the DH schedule.

You’ve spent some time racing a couple of the Australian Downhill National series rounds in the Australian summer and won the first two events, that’s gotta be a great credit to your hard work in the off season?
Yeah the first 2 rounds were some of my favourite tracks in Australia (Coffs Harbour and Awaba), so it was cool to be able to make it out to them. It’s good to have a few good results at the national rounds to build a bit of confidence coming into the world cup series.

At the World Champs in Cairns in 2017 you landed fourth spot. Tell me, are you happy with that or super bummed not to land the podium?
I’m definitely happy with that, but a little bummed as well as I made a big mistake up top. My goal was to get on the podium and 3rd was only like 0.7 seconds away. Next year! It was still one of my favourite races of the year having the whole Aussie crowd and all of my family and friends out there yelling was pretty special.

The evolution of the Intense downhill bike you raced last year went from the alloy to carbon version pretty quickly and it looks like it suits you really well. What makes that bike so efficient for you?
Yeah I went through 3 alloy prototypes and finished off on the carbon one for Val DISole and Cairns World Champs. It was all a little rushed at the start but ended up working out well. The first one was ready on the last day of team camp so we only got a handful of runs on that. We then made a few tweaks to this and Jeff welded me up a freshy for fort Will. I got this bike the week before I flew out and I had a crash, breaking some parts that weren’t available to me at the time so only had a couple days riding on it. When we got to Fort Bill I realised it needed to be a little bigger so we threw an offset headset in it to get a bit more length. I raced that one 6 weeks in a row at two World Cup’s, Two Crankworx and another two World Cups. We had a couple stressful moments that you can hear about in a podcast we just did with Vital while over in California for team camp. Jeff welded me up my third prototype for Mont St Anne with a few more little tweaks but mainly just a little longer. I only raced this bike for Mont St Anne. The first carbon bike was ready for Val Di Sole and this was the hardest race for me. Val Di Sole is hard to set a bike up for that you are used to, let alone something new. The kinematics in this frame were slightly different compared to the alloy version (we went for a bit softer off the top) and the bike was so much stiffer and lighter than what I was use to. Chappy and the guys at Rockshox were playing around with the shim stack in my shock and I pretty much had a different tune going every run trying to find out what was good. This is the stressful part about racing prototype bikes; I will only do 5 runs on Friday, 3 on Saturday and 2 on Sunday so you want to learn the track and get up to speed for racing but this is really hard when you’re playing around with a different set up every run. Of course there is no better way to develop a new bike than world cup racing and that is what Intense has always been about.

You get to pick five trails from anywhere in the world and from any period of time in the world to make up a World Cup season. What are they:
Mont St Anne
Merribel
Schladming
Fort William
Andorra.

You have a ten hour road trip in front of you and can take three people. Who do you take and why?
It really depends on the activity! There’s been a couple good road trips with the boys from back home but if you’re talking riders: Laurie Greenland – ‘cause he is a homie, loves to surf, ride, and is always up for an adventure. Deano - He’s my team mate, so obviously I travel with him all the time. We get on really well and it’s always a good time when we hang. Jake Newell - One of my buddies from back home who does a bit of World Cup racing as well. He’s one of the funniest guys you will ever meet, always doing dumb shit and making people laugh.

Describe the hour before a World Cup race run. What’s your prep and mental state?
Practice finishes at around 10am and if you qualify good you will be waiting until around 4 to start. So that’s about 5 to 6 hours of being extremely nervous. With an hour to go I’ll be getting on the lift and heading up with Chappy to get warmed up. I’ll do a half hour warm up on the trainer listening to some gansta beats. I like to go over the track in my head a couple times and remember all the tricky lines. Since you haven’t done a run in about 5 hours, you need to get in your head exactly where you are going and remember spots that could be blown out. After that I roll over to the gate with Chap and try lay one down.

We often hear of riders playing the rain game. Is that actually a thing and you aim to qualify low to avoid the weather on race day?
I don’t think people play the ‘rain game’ at world cups anymore. There are a few reasons for this: Times are so tight you could miss out on qualifying for the race if you mess around, you get points for qualifying and you need every point you can get for the overall. You’re not going to risk this because you heard it might rain at 2pm on Sunday. We race in the Alps where it could be full sunny and a storm blow in within 20 minutes. If a protected rider does a slow run, they don’t go at the start of the top 80 and they get slotted in just before the rest of the protected top 20 so not a whole lot of time difference.

Travelling the world testing, riding and racing sounds like an amazing experience but tell us what you miss most when you’re away from home:
Yeah it’s so much fun and I’m so grateful I am able to do this for a living. It does get tough at times though; being away from my girlfriend, friends and family for a couple months at a time, always being under pressure to perform and having big crashes can suck.

You’ve had some cool people help you out over the years, wanna give a shout out?
Yeah it’s pretty crazy to think back to how all this started. I realise how lucky I was to have so many great people that supported and mentored me. First off would be my parents for driving me around to races and believing in my dreams. Dad use to race motorbikes and taught me so much about riding and racing. Mum put some serious mileage on the shuttle vehicle when I was a grom haha.
Gav from Kempsey bike shop and Giant Australia for helping me out with my first ever sponsorship.
Ricky Boy and Lusty; Ricky is an Aussie downhill legend and I learnt so much from riding and racing on his team with Muddy.
Jared Rando; The Best Aussie junior coach ever. Going to my first world cup was an eye opener and looking back on it now I don’t know how I would have survived without him there.
Paul Rowney and Yeti Rowney has so much knowledge on racing and training. He really helped me with my transition to international racing.
Tim Butler Tim was my training partner (before he got fat haha) and boss. He got me out of KFC and gave me lenient work so I could save up and go racing overseas. He would take me shuttling and riding before and after work.
Eddie Masters and Bergamont bikes; These guys really kick started my international career by getting me to a whole season of world cups. I have some of the best memories travelling with this crew.
Ivan Jimenez Ivan was the Intense factory racing manager and my mechanic for the first and second year of racing with Intense Factory Racing and he believed in me and welcomed me into his home in Spain like I was family. My current team Intense factory racing; Jenn, Jeff, Chappy, Bernat, Erny. I’m so glad I ended up in the Intense Cycles family. Apart from being involved with such an iconic brand, they have stuck by me while I have experience some of the shittiest times in my racing career. I am coming into my 4th year with them and have just signed up for a couple more years. Let the good times roll!
Muddy; he is helping me with my prep in the gym coming into this season

Thanks Jack, we're all behind you and wish you well for a big 2018. Stay rad. 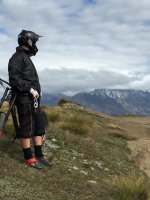