I've been wanting to try a carbon hardtail for quite a long time now, but everything new either didn't tickle me or was just stupidly expensive, or had a weird mish-mash of "standards" fitted and I'm trying to standardise my fleet as much as possible. While I like a light bike (and while that was definitely part of the appeal of a carbon HT) I wasn't chasing anything ultra-lightweight (or fragile!) for racing - I just wanted something a bit lighter and more comfortable for flatter rides than my other bikes. Even still, this bike came together as something of an accident...

Originally I had just intended to rebuild another frame I'd previously decommissioned with a bunch of garage spares for bike-path cruising during COVID-19 lockdowns. I already had a fork, wheels, spare drivetrain, etc... just sitting there. Then I spotted a For Sale ad that piqued my interest - @PJO was advertising some used carbon rims. I wanted (but didn't want to pay brand-new prices for) a set of skinnier carbon rims, as I only wanted to run <2.3" tyres for better efficiency on the bike paths and smooth dirt trails around my home (I am not blessed with proper MTB trails at my doorstep sadly). I checked the rim spec, 30mm ext, 24mm int and lighter than alloy for the same size, but not so light I'd constantly have to worry about them. Perfect. @PJO was an absolute legend and had them in the post the same day I enquired about them - How's that for good service!

Pulled the red Hope hubs from from the old wheelset, and sent them and the freshly acquired rims off to @The Duckmeister for the build.

Then along comes @Scotty675 and starts hinting broadly that he's thinking about selling a bike I've oogled every time he posts a picture of it.

"Ah, I don't reckon he'll actually sell it" my mind says - "Even if he does, he'll probably want too much for it, or only want to sell complete..." it continued.

And then it happened. "It's up! He's put it up and the price is reasonable!" (Very reasonable)

A furious scouring of Santa Cruz's Bike Archive spec sheets. My parts will fit, no new purchases required. The hubs I've sent out for the wheel build even match the colour of the anodised headset and BB he's including with the frame. Is this fate? It must be! A moments agonising over the geo maybe being too short. "Stuff it!" Heart beats head, and a PM is sent.

Then the wait. A few "Next in line if sale falls through..." posts appear on the for sale thread. "Did I miss it?" I wonder. "Was I too slow to send the PM and someone beat me to it?"

Rather oddly (given the state of the world at the moment) - All the pieces came together a lot faster than I expected. The frame arrived within a couple of days from Tassie to Melbourne (Thanks again @Scotty675), the matchy-matchy red brakeset I couldn't help myself but to splurge on arrived in under a week from the UK and I definitely hadn't anticipated that happening! Wheels had just been finished, but were still out the other side of town... Drat. Then a beacon of light appeared as Melbourne's COVID restrictions eased slightly. Buyer and builder's new 25km travel radius overlap by a mere few hundred metres. We're on! Wheels are collected and a quick single-speed build is thrown together. It rides! And it rides nice!

So some of you may be wondering - what does the future of this bike hold? Well, riding it more somewhere with proper trails of course. But before that I will build it up with gears as it will be much more practical (especially given my current COVID lockdown fitness!), and I've already ordered a dropper post as well - because A) with the seat at my ride-height it's bloody hard to get on and off the bike, and B) it feels way less sketchy descending than I expected - so it will see use on some proper singletrack use in the (hopefully) not-too-distant future!

And because pics still say more than my loving narrative above, here's how it looked once the first build was completed: 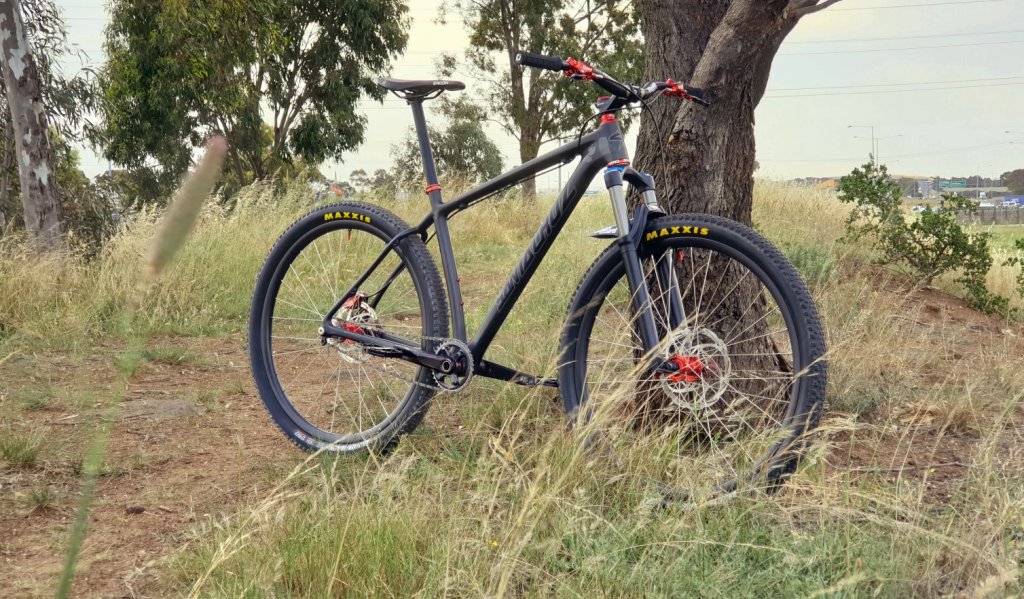 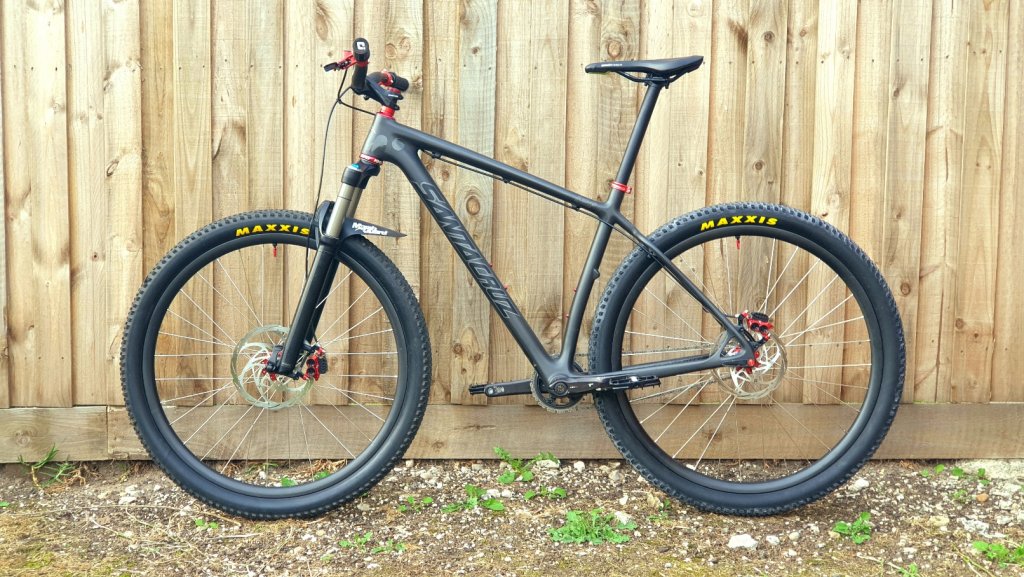 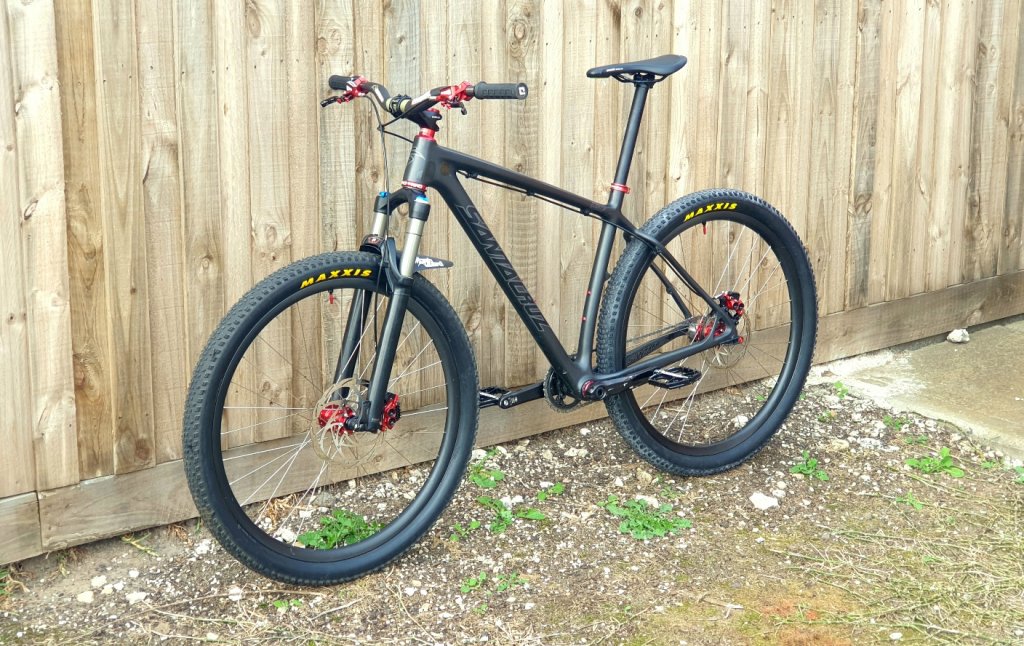 You are going to ride this all, the, time.

Keep it ss.
Look how clean those bars are! Pick up a cheeky tensioner though.

Keep it ss.
Look how clean those bars are! Pick up a cheeky tensioner though.
Click to expand...

You mean, install the cheeky tensioner... It'll be a shame (aesthetically) to put a dropper on it, but it's quite awkward without one. Will probaby swap back and forth between geared and SS to be honest. But yeah, I know what you mean. So fresh and so clean!

Seemed pretty good when I took it for a run this morning. Wasn't until I stopped I realised it had some shocking brake rub on the front. The pistons had only started to move from one side of the caliper, got the other moving and all fixed now so it should be even quicker next time out... I was just going for the extra workout effort I tells ya!
Last edited: Oct 23, 2020
S

Very,very nice. Nice clean build. Amazing how clean it looks with a few less cables. At least I can sleep at night knowing it’s gone to a good home. If you ever need more red accents, I know a bloke with some. 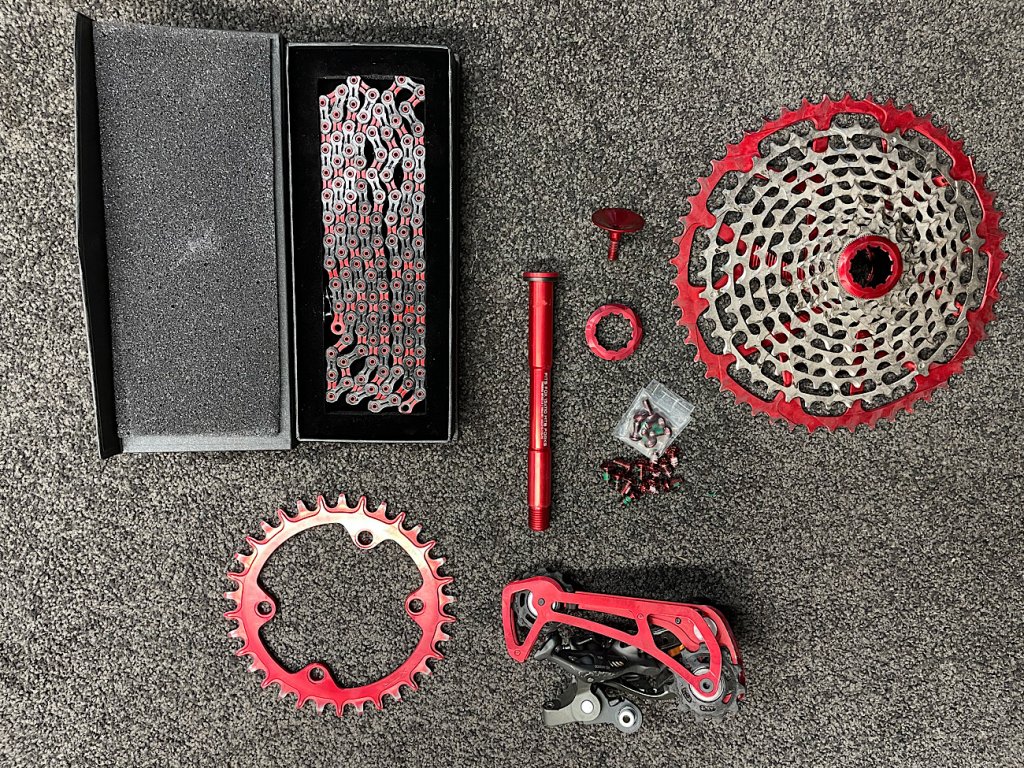 beeb said:
You mean, install the cheeky tensioner... It'll be a shame (aesthetically) to put a dropper on it, but it's quite awkward without one. Will probaby swap back and forth between geared and SS to be honest. But yeah, I know what you mean. So fresh and so clean!
Click to expand...

Shhhhh you don’t need a dropper, keep it interesting and run rigid. You have two other frames for dropper duties.

Ultra Lord said:
Shhhhh you don’t need a dropper, keep it interesting and run rigid. You have two other frames for dropper duties.
Click to expand...

I toyed with the idea, but dropper's already ordered. Rigid post is fine mostly, but a little too sketchy in low speed tech for my mediocre skills!

Love it @beeb You always do great looking builds to keep us SC fans dribbling. Your cables are almost invisible.

Get dropper, add a bit of weight and forget all about to use it when you need it. That's the not so well thought out plan
This highball is going haul and more so with some gears. Your knees will thank you in a few years.

Ultra Lord said:
Shhhhh you don’t need a dropper, keep it interesting and run rigid. You have two other frames for dropper duties.
Click to expand...

You didn’t have multiple bikes at the time.
I just wanted you to get the most out of your trek across multiple types of terrain, to make your riding experience better, and safer on those trips to actual mtb trails, in the mountains.
It’s kinda nuts how hard you can push a xc hardtail when the seats slammed.
Last edited: Oct 23, 2020

I bought a 2nd hand carbon 2012 Scott Scale Expert a couple of years back - even with 3x10 XT it was ridiculously light and went like a rocket - frame weight was under 1kg from memory. Would have kept it but as an XL it was just a little too big and I never felt quite at home on it.

I bought a 2nd hand carbon 2012 Scott Scale Expert a couple of years back - even with 3x10 XT it was ridiculously light and went like a rocket - frame weight was under 1kg from memory. Would have kept it but as an XL it was just a little too big and I never felt quite at home on it.
Click to expand...

Funny you mention having a similar type bike that felt too big, theoretically this should be/feel too small for me - but strangely, it fits really well. Admittedly I wouldn't want to ride any double-black diamond trails on it, but for a mix of bike path, gravel grinding and flow trail riding it feels great. Longer chainstays than what I'm used to, and the short reach, longish 80mm stem and steep HA mean I've got always got the front weighted without even having to try to which is great for seated pedalling, and while that long stem keeps it feeling stable - it's plenty nippy and responsive when it is fed some steering angle. I'm stoked!
S

Special surprise on its way. Don’t thank me thank my 4yr old daughter.

I am intrigued. Please tell me it's not a "Please give daddy his bike back..." letter!
S

beeb said:
I am intrigued. Please tell me it's not a "Please give daddy his bike back..." letter!
Click to expand...

Well she did drawer you a picture ha ha. Let’s just say @Scotty T is going to see red

Rad looking bike as usual, love it. One roundabout question though: I love flat pedals and run them religiously except a) on a road bike when I had one and 2) on my singlespeed - long story short I just found it's a lot easier to ride an ss clipped in, especially given how much time you're spending out of the saddle?
You must log in or register to reply here.
Share:
Facebook Twitter Reddit Pinterest Tumblr WhatsApp Email Link
Top