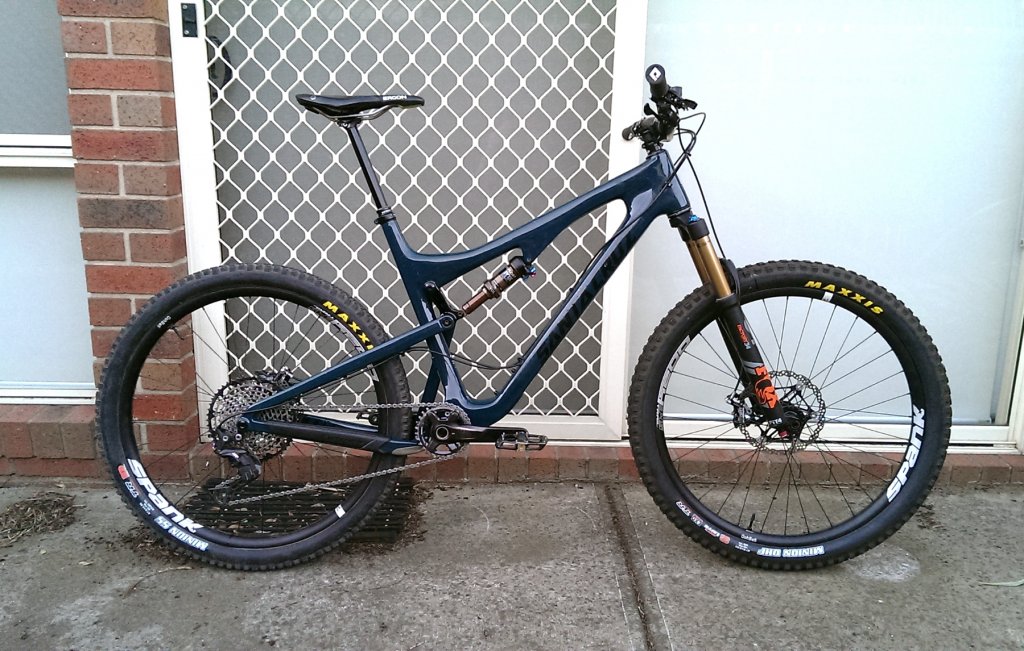 Basically I purchased as I was missing my previous 5010 a little too much, and while the Ibis Ripmo I had replaced that 5010 with was an awesome bike - I wasn't enjoying the 29er life.

While this build spec is certainly decent - I have quite a few changes planned for this bike in the not too distant future. Future plans involve:
Down the track if fiddling with volume spacers in the stock DPS EVOL doesn't satisfy me, I'll possibly change the rear shock to either a Fox X2 (modified for a few extra mm of shock travel), or maybe a coil shock (with similar modification) as I've always wanted to try one and suspect they would be a fun match for this bike as long as I could get a shock with a firm lock-out/pedalling mode for the fire-trail climbs. I also have a Work Components -1.5 angle headset I will quite probably install to slacken off the front, but will need to bump the fork travel to at least 140mm to do so without lowering the front, so will probably look to do both of those around the same time.

If I go ahead and do both I would end up with a 140mm front/~138-140mm rear (up from 130mm/130mm stock) with a 65deg head angle that should still retain the light and poppy trailbike feel I like from these 5010s but with a bit more capability/safety in the rougher stuff. Not going to lie - I'm especially exicted to get the Project 321 wheels built up. Given the previous 5010 loved to "boost" off everything with the Hope Pro4 rear hub - this one tuned with a touch more midstroke support in the rear suspension and the new hubs should be a boost monster!

Cheers. I've got to admit I prefer it to the red one I had previously. Will look better once the fork decals are colour coded too though. Nice and stealthy.

That colour in the photos at least looks epic. More detailed shots please.

Indon’t understand hubs helping with being rad? How do you figure it’s gonna be easier hopping the bike off stuff without the hopes?

Unless you’re referering to using the higher engagement to pedal kick off stuff trials style.

I’m really diggin the wider rim front, skinny at the back. It really nails home the mullet vibe this little shred machine has goin. Enjoy your santa cruz scout haha! This bike looks so fun

How do you find the bikeyoke revive?
Need a taller dropper than the 150s I run.

Ultra Lord said:
Indon’t understand hubs helping with being rad? How do you figure it’s gonna be easier hopping the bike off stuff without the hopes?

Unless you’re referering to using the higher engagement to pedal kick off stuff trials style.
Click to expand...

Not so much meaning with jumps or techy trials features, more when bouncing/pushing into the bike to "boost" it along trail undulations and features - there's a little play before the Hopes engage at times - not heaps, but still noticeable. The P321s feel like they'll pretty much instantly engage, so should add-in a little extra bonus boostage when using the trail like that. Just turning up the playful character of the bike another notch basically. The downside will be bastard pedal kickback through rock gardens, lol.

HindleJ said:
How do you find the bikeyoke revive?
Need a taller dropper than the 150s I run.
Click to expand...

Absolutely love it. Smooth as silk. Does need to be "revived" now and then (probably every few weeks or so), but it's a 20 second job with a 4mm allen key. And I did chamfer the edges of the top of the post a little as I found the seat clamp wasn't locating perfectly, but I would definitely buy another regardeless. The extra travel is awesome too, and they have the added bonus of having a very low profile collar, so it gives another 5mm or so if you're make or break trying to squeeze it into a frame.

My 185 revive’s been awesome too, had it a little under a year, no dramas at all

Doesn't fit since I chamfered the edges of the top of the post for better seat clamp seating... I may have to take to it with a file and make it fit when I get a bit of free time one day. 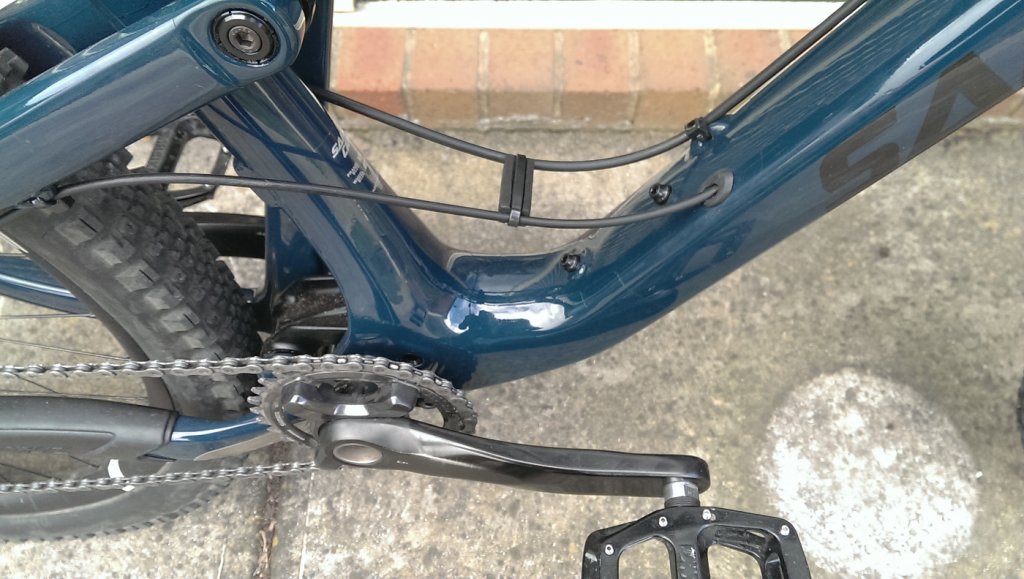 Or it's a bit of old garden stake I took to with a hacksaw and needle files and a permanent marker. Haha.

Either way, it stops the shift cable bowing out to the driveside as these 5010's love to do with the unsupported cable mounting. I have a volume spacer kit to play with during the week, then the bike will get its proper debut ride next weekend. Too much time at work this week!

Such a waste of a bottle cage mount

hifiandmtb said:
Such a waste of a bottle cage mount
Click to expand...

Might become home to some tools and a tyre pump one day soon, but I'm not much for carrying water on the frame if I'm honest. At least not yet, never say never and all that.

beeb said:
Might become home to some tools and a tyre pump one day soon, but I'm not much for carrying water on the frame if I'm honest. At least not yet, never say never and all that.
Click to expand...

It’s a slippery slope those bottle cages, hold out as long as you can.
I kinda hate backpacks now and I feel like such a sellout

Finally took it for a ride.

Such a fun bike, the quick steering response even with wide 770mm bars is addictive - definitely a much better fit for me than the size L I had previously. Got to admit I reckon a degree or so slacker in the head angle would be ideal for me, and will likely be played with later.

I have ordered some Nextie rims to build to P321 hubs, and for @Ultra Lord some "stealth bling" black brake lever adjust screws and frame colour-coded fork decals to get the visuals a bit more coherent and stealthy.

[Random tuning notes mainly for myself to refer back to - ] I dropped down one size for the shock volume reducer (from 0.6 to 0.4) and ran the base pressure a little higher given the VPP leverage curve loves to fall straight into the mid-stroke. Felt bang on - much better than my previous 5010 when I had NFI how/what to tune. It gave a much smoother overall progression than the factory setup and was still compliant over the rocks and roots - and best of all it wasn't blowing through the midstroke and using up too much travel on minor trail features like the previous one. Just kissed bottom out on the first run out due to mis-timing a jump - but a bit of extra pressure added (up about 25psi from "base setting" to 235psi for my rather portly ~95kg w/pack weight) and getting better jump timing kept the O-ring off end of travel for the rest of the day. One click extra front compression and rebound damping, a bit more front tyre pressure and the thing was railing. Only did a few runs of Cressy but had a ball.

But one of my favourite non-MTB bits of the day was seeing a "Stumpy-Tail" (Shingleback lizard) out and about. Haven't seen one in the bush for years now, so was pretty stoked with that.
Last edited: Sep 22, 2018

Thats gonna look great with the murdered out stickers! Love it.

Glad it was what you wanted.

Swapped to a Spank Spike Vibrocore handlebar and Thompson X4 stem. Also got around to installing the black bite-point and reach adjuster screws on the brakes. From a 30-second ride in the park across the street which has usefully uneven ground for testing purposes - These are noticeably less flexy (coming from Renthal Fatbar Carbon 35's), but surprisingly - a lot more muted. That vibrocore stuff really works and feels like no other bar (alloy or carbon) I've tried. Will be interesting to see how the altered feedback feels out on the trails proper. Looking forward to the crisper/more accurate steering though!

Still waiting on fork decals however... 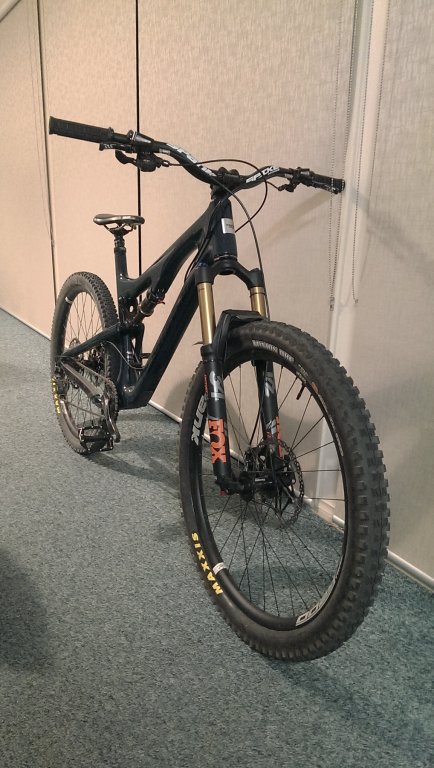 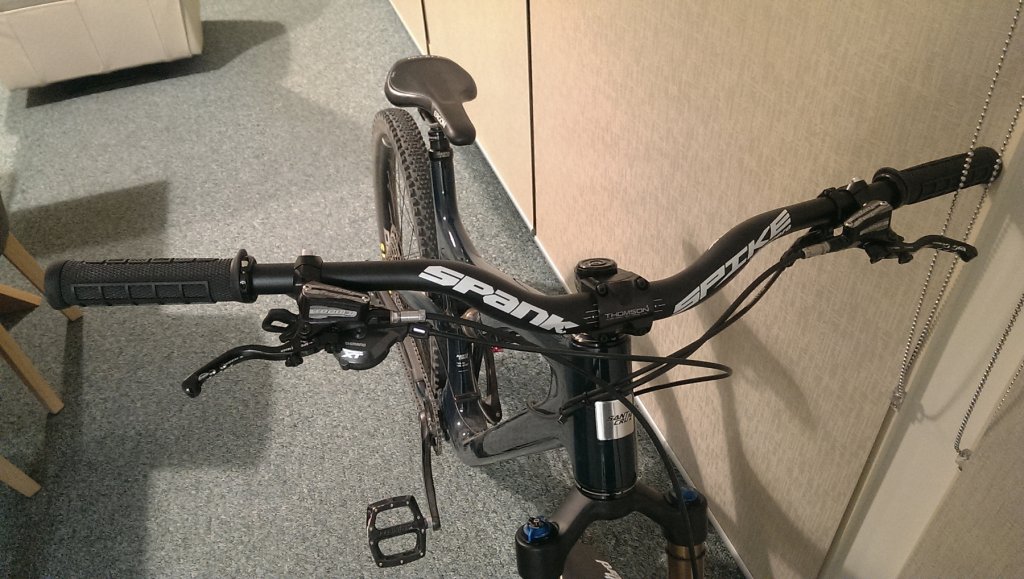 I have also ordered a Michelin Wild AM in 2.6" to try on the front after sampling the 2.8" variant on a mate's 27.5+ hardtail, and will be ordering a 37mm offset CSU and 140mm airshaft for the fork tomorrow to start to get ready for the angleset install (probably in a few weeks time). Loved the reduced offset/increased trail feel on the Ripmo, so I'm super keen to mix that geo's feel (low-speed turn-in grip, and high-speed tracking) in with this bike's playfulness. Gone a bit silly with the spending lately, so hopefully that'll be it for a while!
Last edited: Oct 2, 2018

I also need to decide on Kashima anodising for the CSU, or head closer to a total blackout... I think I might be leaning towards the stealthy black look, but will think about it more tomorrow.

Not my bike, but a quick Photoshop job below:

Oooooooft that looks unreal! I want black reach/bitepoint adjusters now too
Might add some to the order when I pick up some floating rotors....... in black

For the fork, dare I say....... kashima? Because the rear shocks cashymuch, it would unbalance the bike having black fork stanchions.

This is proper bike build tinkering!