That beemer is cool. Are the maintenance costs for those euro cars as bad as everyone makes out, say compared to something else quick and japanese?

Staff member
Cheap compared to an R35 GTR, not sure what else Japanese is quick. Anything crammed full of tech is likely expensive to repair when it breaks. Had some experience with Golf Rs. Hard to track intermittent faults and the codes were nothing to do with the actual problems. Cable into the ecu and the fuse block. The latter is quite common.

Also in the internet age euro car parts are cheap. Beemer parts you’d probably source mostly from the US.

Would never own a German car stuffed full of tech if I couldn’t fix it myself, potentially crippling service costs even via independent workshops. There is a huge online community, and all of the bmw dealer software has been released online.

Parts out of Europe and the USA are not insane.
S

link1896 said:
Would never own a German car stuffed full of tech if I couldn’t fix it myself...
Click to expand...

This. Also you've got to remember that a car like that was worth 250k new. If you need to spend a bit of money to keep it running in tip top condition then its not like pouring money into a cheap POS. If well maintained it will always be a fantastic car.

Great score, looks very minty. You shouldn't have to do much with it at all apart from a service and get out an enjoy it.

Now, about the bikes, roof racks or a tow all mount?

Yeah right. Because there is this near me. I definitely can't fit my bike in my wrx. Reckon i could fit one here?

clockworked said:
Yeah right. Because there is this near me. I definitely can't fit my bike in my wrx. Reckon i could fit one here?

Try one of those detachable towball hitches for the WRX. I have one on my MPS and you have to look hard for the mounting bracket when the rack is removed.

Just don't get the urge to do some towing since those hitches are rated for it - not that you would on a WRX.

I shoved bikes in the back of my old hatch before and it did work fine apart from getting all sorts of dirty trailside crap in the car also. A 2mm Bunnings plastic sheet cut to fit the rear cargo area does help a lot. Overall the hitch mount is much easier.

The problem is when you need to buy genuine parts or insure European cars, if you crash an older model it will be an instant write off.

Flow-Rider said:
The problem is when you need to buy genuine parts or insure European cars, if you crash an older model it will be an instant write off.
Click to expand...

Thats a good thing - if its badly damaged id prefer its written off anyway. If its light, buy back the wreck and repair yourself and often come out ahead.

Mate of mine has 2 BMWs. He buys a lot of parts from Pelican Parts in the US and they are happy to ship to AUS.
S

Staff member
As the Escort is post 1974 it needs a collapsible steering column even though it wasn't fitted with one new. Actually it is one interpretation of the rules pertaining to ADR10 but I think it is dumb not to have one rather than argue the point. I found some interwebs posts talking about guys fitting early Laser columns but having to weld joiners on etc. Then I found an obscure post where someone said they fitted an early Gemini column to a series 2 Capri. Capri and Escort shared the same rack and column. No details and no further comments. I bit the bullet and grabbed a T series Gemini column. Overall good condition and when I compared them side by side very close in length. The Escort steering wheel is offset and angled so I put the new crossmember in and the rack and fitted the original Escort column and RS steering wheel and measured it. The stock set up is severely on the piss! Anyway then put the momo and boss on and repeated the measurements. Put the Gemini column in and positioned the column where it needs to be, used the Escort boss kit and momo and it looked doable. Rang around this morning and grabbed a Gemini boss kit and then started making up a mount. Bits were cut off to make way for studs and new studs were screwed where the Gemini column mounts. Managed to take about 10mm of the off centre and angle out though you still notice it until the position becomes second nature. 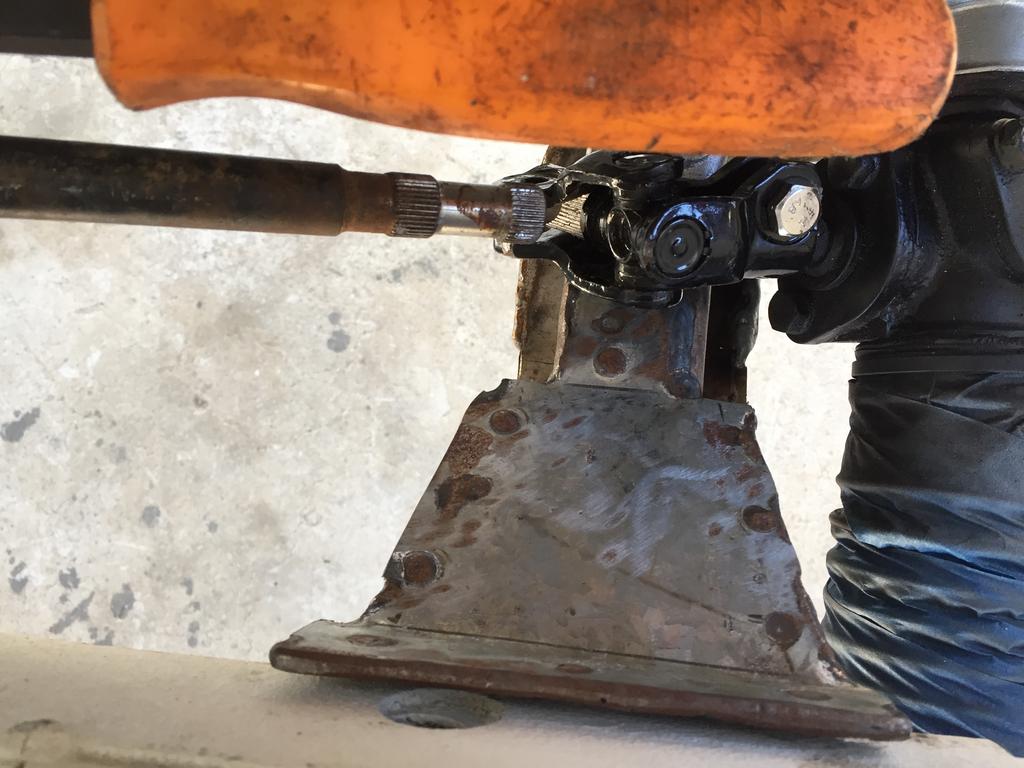 The Escort rack is a 9/16" 36 spline whereas the Gemini is 5/8" 36 spline. I think I can get an adapting uni joint but if not I will split one of each and make up a new joint. The crossmember works well. Column wasnt bolted in here and needs to move over a bit. 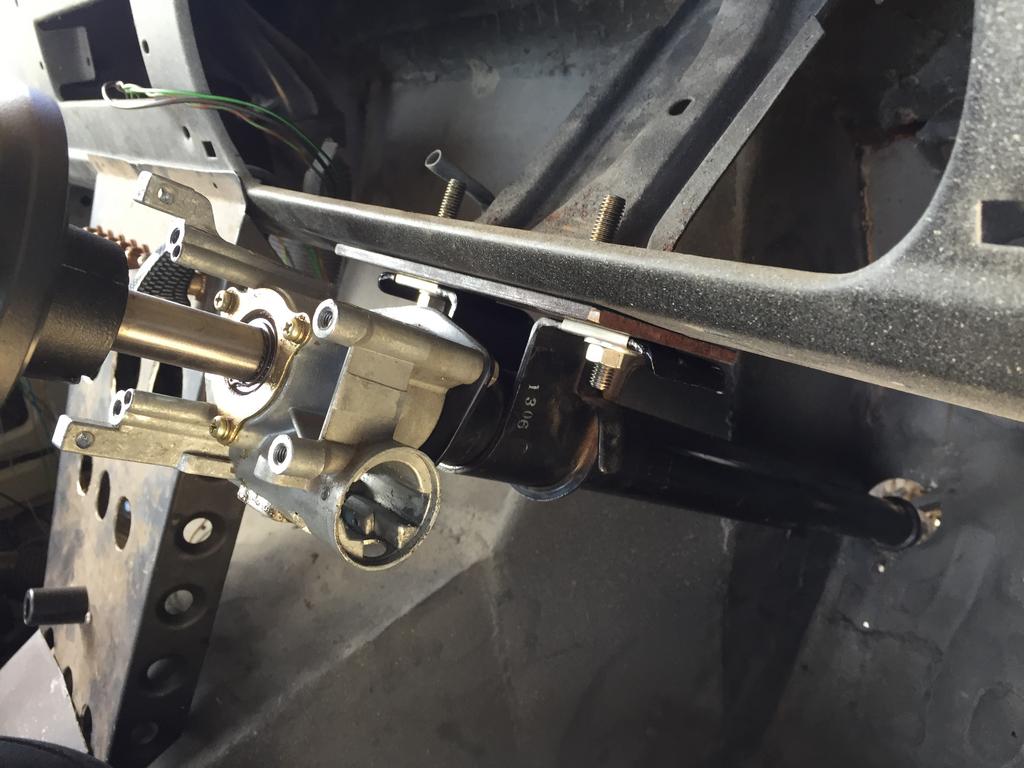 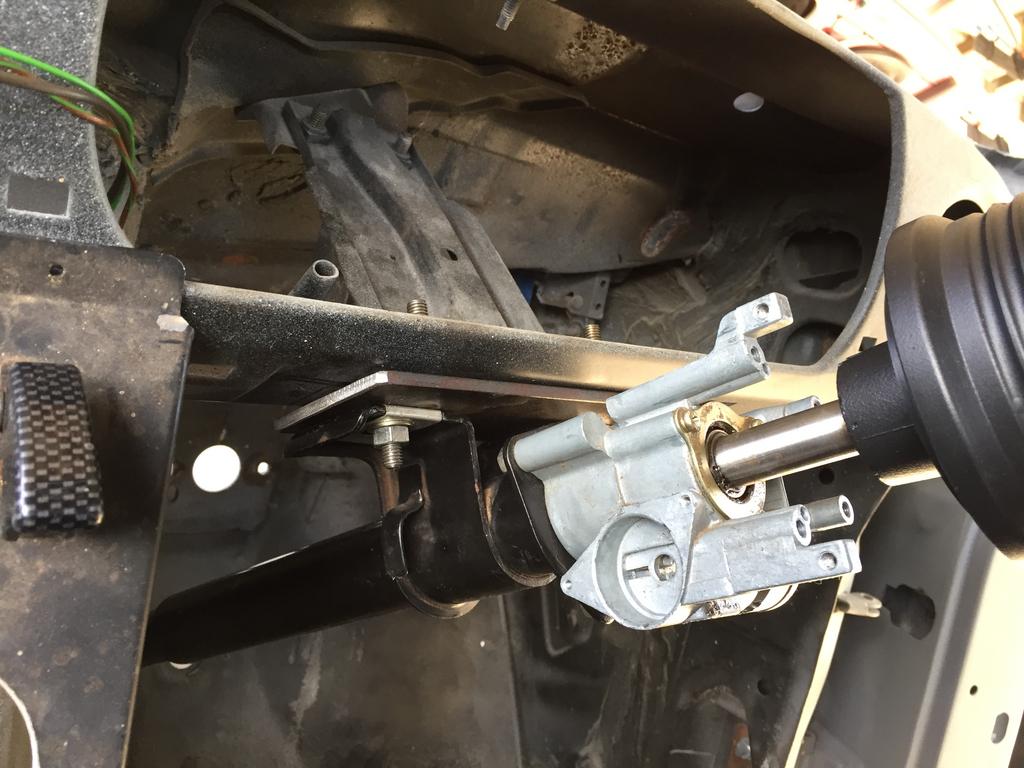 Isuzu key barrel and steering lock are now just swarf on the floor. We are running push button ignition and switched fuel pumps so no need. 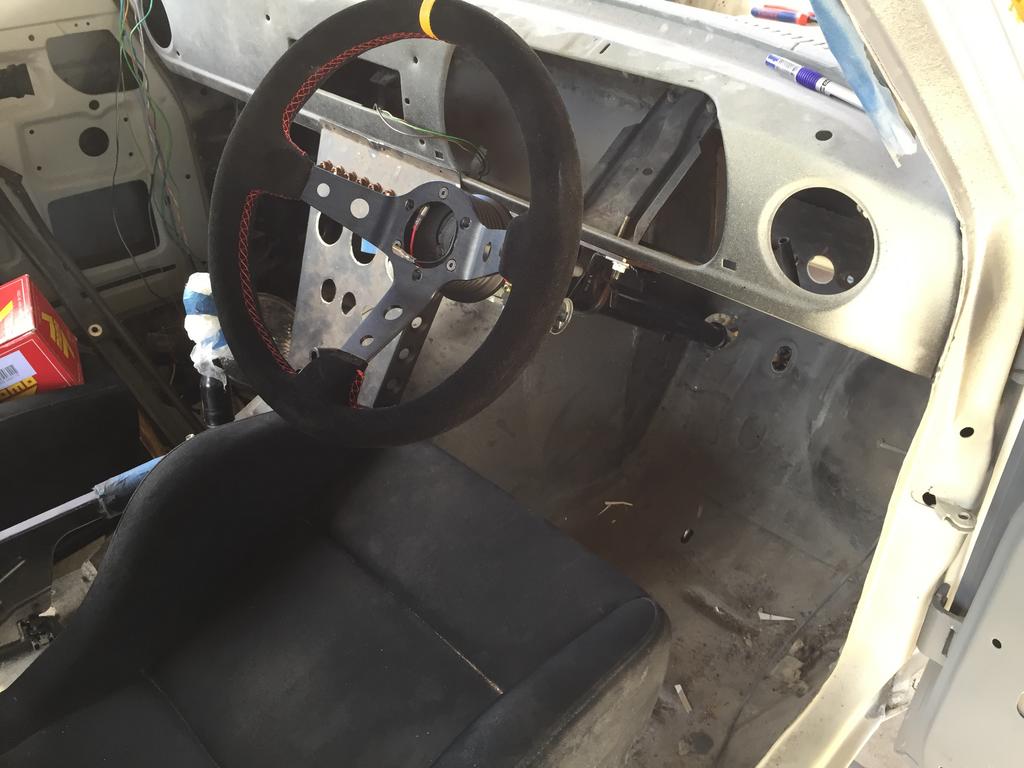 Check fit before putting the switch gear on and pedal box in. 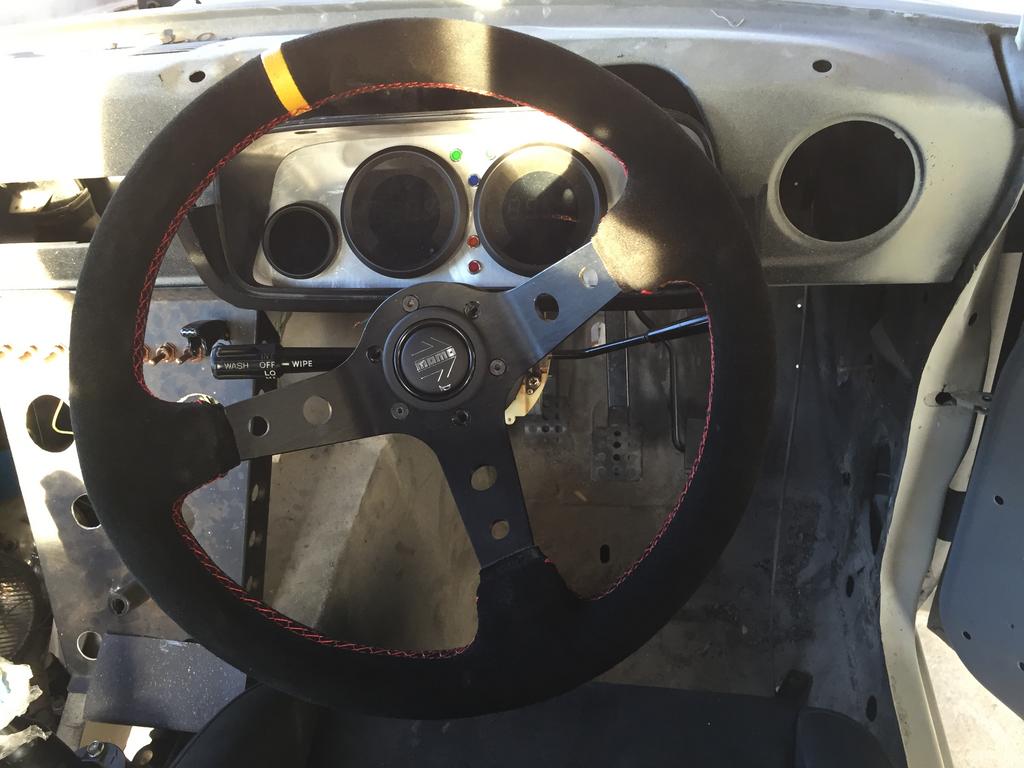 And here is the final mock up. Wiring the XR4 wiper motor and the Gemini switch together was doing my head in until I realised the Gemini is negatively switched while the XR4 was positively switched. Dumbarse I am. Wasted an hour. No wiring diagrams that I can find for the Gemini but no excuse. Relationship between seat, pedals, wheel, shifter and switchgear is good and better than factory.

I managed to find online a Ford engineering document about the Duratec. It lists acceptable setup angles and oil sump capacities etc. For and aft needs to be within 5 degrees of horizontal either way. Ours is bang on 5 up rear to front and the nose is about 1 to 1.5 degrees high as it is sitting on the trolley so that is good. Hard to go lower without a whole new crossmember. Again. Oil sump is off a 2.3 Ranger so about an extra litre in the sump which is also a plus and another 500mL or so in the air to oil heat exchanger. I am not going to use the water to oil unit that came with the XR4 engine, cooling will probably be close anyway.
Last edited: Mar 10, 2019

What was the solution for this on Gordon Murray's car?

Staff member
Good point! They did something but I cannot recall. Gordon is about 6'19.7" tall so they moved him into the back. Might go and look again.

Edit: just had a look. Clearly a collapsible column but no details. Looks like the type that are fitted to hotrods.
Last edited: Mar 10, 2019

You've probably sorted it, but Oldholden.com for the Gemmy info?

Cardy George said:
You've probably sorted it, but Oldholden.com for the Gemmy info?
Click to expand...

Yes but I need to decipher the other side too. Ta.

clockworked said:
Yeah right. Because there is this near me. I definitely can't fit my bike in my wrx. Reckon i could fit one here?

Dont think you'll have a problem.
I've had mine in the back of a M2 coupe lol.
But roof racks are easier! 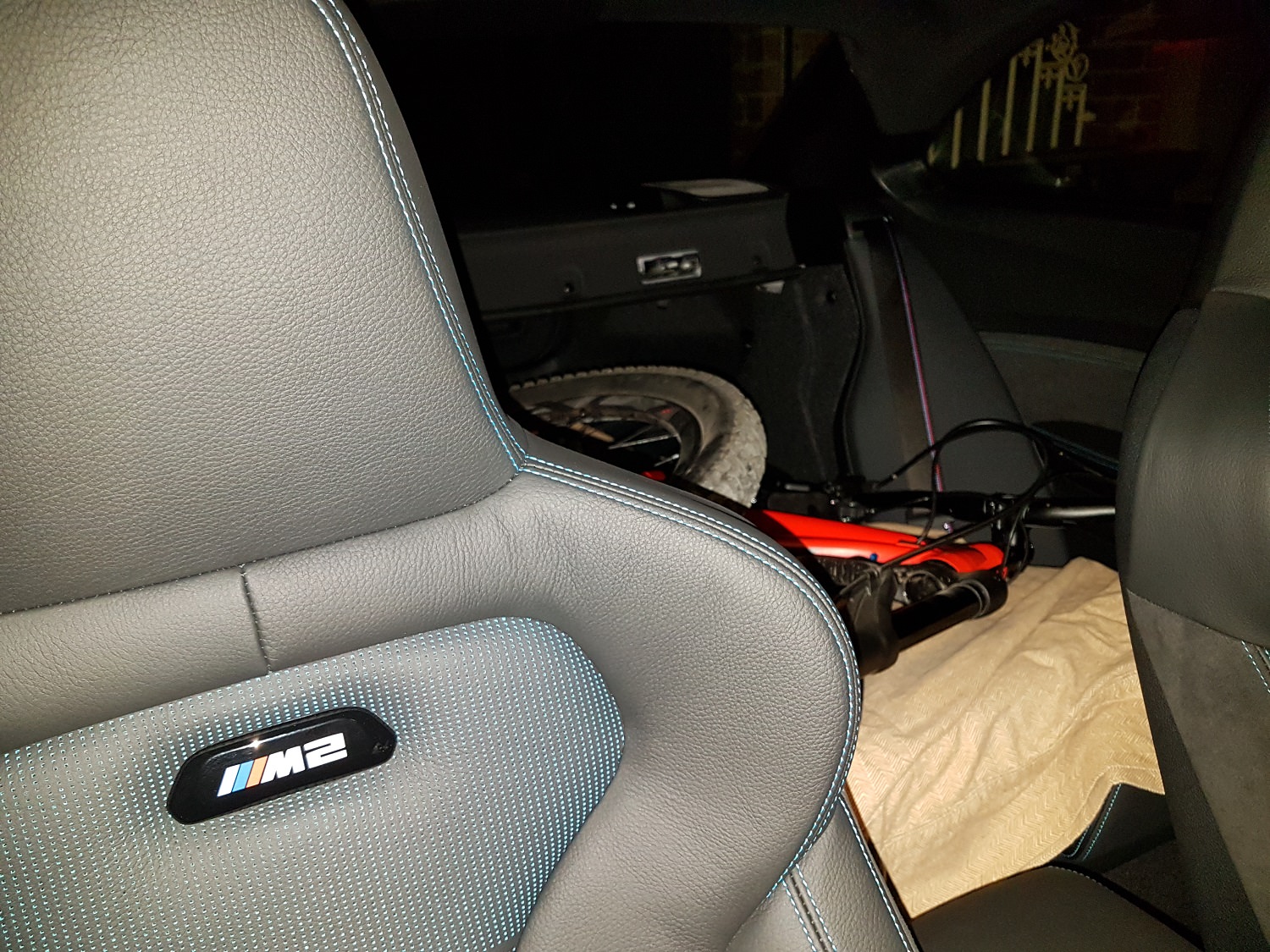