So, going back a couple of months I decided I wanted to simplify my riding. I've been lucky enough to own some very high-end carbon trail and enduro bikes, have ridden a few mates alloy and carbon dual-suspension bikes from different brands, and while I'm not against having a dually - there's something special in my mind about riding a hardtail. I love the immediacy of every pedal stroke, and the lightness and playfulness of them. However - the hardtail I owned at the time (an Octane One Prone 29er in size L) was an alloy frame - and a very sturdy frame at that. It had good geometry though fractionally small for me, and was a very harsh ride - even as far as alloy hardtails go. I've also ridden a couple of other alloy hardtails (which were plusher than mine, but still slightly more jarring than steel/Ti) and have had a couple of very brief spins on a couple of steel hardtails. So I started thinking about getting a steel hardtail to get a bit more small bump and chatter compliance on the trails. Around that time Marino bikes were making a splash on the custom scene, and that got me thinking about custom geometry bikes. Unfortunately I had little success when it came to getting responses from Marino - so the idea of going custom "died on the vine" for a while. I looked at many a manufacturer's frame, but nothing quite matched what I wanted.

I'd read about Waltly in the past, but it wasn't until now I had reason to dig a little deeper. I got my Google-fu on, and spent a lot of time trying to find reviews or forum posts or whatnot about Waltly. There wasn't many - but they were all positive - so I decided to take the plunge...

I expected communications to be difficult, but to be honest - it wasn't really that bad. Admittedly, the first drawing I got back was pretty generic (but that's partly to do with the limited detail on their initial estimate form) - but it didn't take long to correct the geometry to what I'd asked for. Probably the strangest thing about communications was all the technical specifications and geometry details are easily communicated, but the conversational chat or trying to describe minor frame details are where things can get a little lost in translation (For example: I hit a brick wall trying to check if the cable-guide would allow a zip-tie to slide underneath, or if they would only work with the plastic C-clips that clip on). My advice for anyone thinking of taking the plunge, is find (or take) example pictures of every little detail you need to communicate, then once you get your geometry and frame tubing design sorted just hand-draw any hardware placement amendments (like cable guide placement) on prints of the drawings they send you, scan them and e-mail them back. This'll make the process as quick as possible. But most importantly - think long and hard about exactly what geometry you want before you get the ball rolling. Chopping and changing geo repeatedly would seriously slow the process down (not to mention waste their time a fair bit).

Anyway - the process went really smoothly for me, and it only took about 12 days from initial contact to design approval. That might sound like a long time, but during that time we got a frame and (for another bike) fork designed, including custom curved tubes, one geometry redesign (I changed my mind on a couple of details), altered drive-side chainstay from plate-type yoke to full tube design, rearranged and added extra cable guides, etc, etc, to finally end up with this:

I setup my fork axle-to-crown measurement in the diagram to be between the measurements of a 140 and 150mm travel of my chosen fork, so I would have some head angle-adjustability if desired using different fork travel rather than having to use angle-headsets. 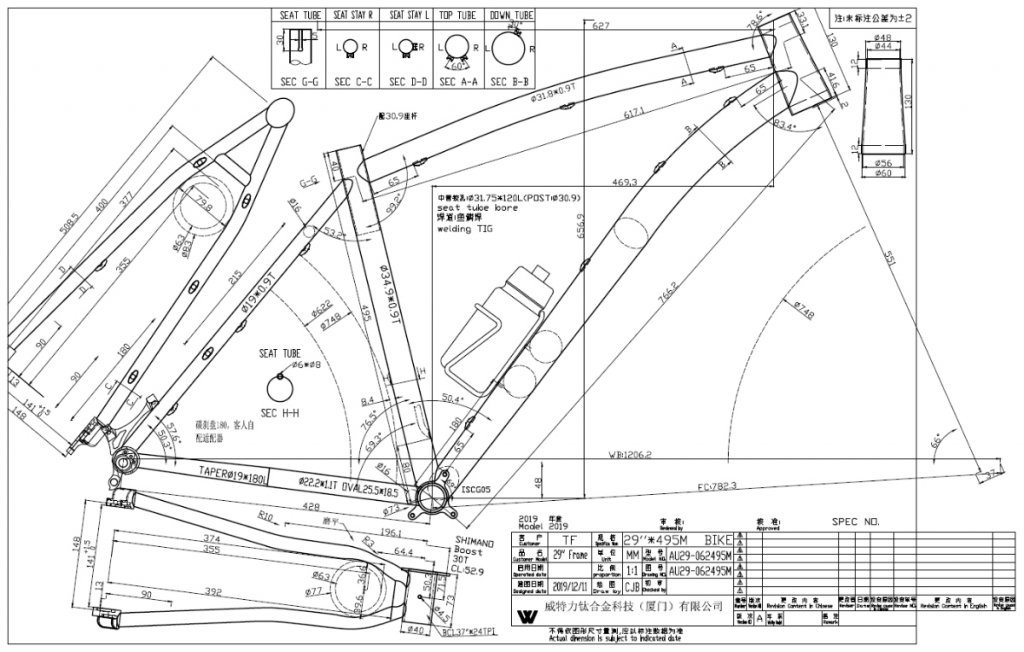 The frame was then roughly 5 weeks in the build, and roughly a week in freight - pretty good given it was just after the annual Christmas/New Years post chaos!

I also ordered a spare axle and hanger, as the hanger seems to be proprietary so I thought it best to have a spare just in case. (The other black pieces are a clip-together axle spacer that came installed in the frame to prevent any damage in transit)

I'm guessing a few of you are probably wondering about the quality of the welds. Well, suffice to say they're good. Very bloody good! 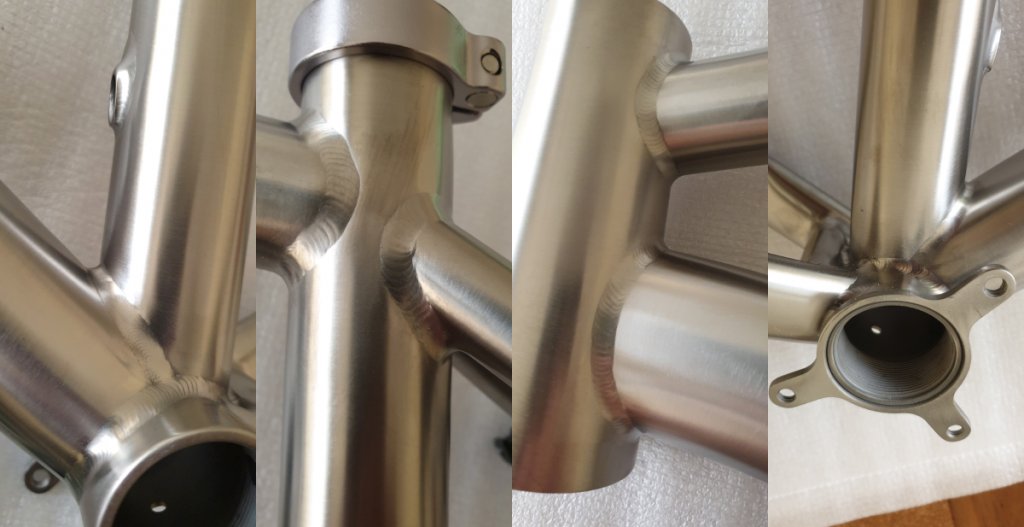 So with the frame received, it was time to build! Specifications are as listed below:

Took it for it's maiden journey today, and - somewhat to my surprise if I'm honest - it feels like I'd hoped. Fit is great (almost like it was custom-made for me!), and it's nice and light. The ride quality is super, super supple. Even with the 2.35" rear tyre pumped fairly firm bumps up to about 15mm are absorbed nicely (even if seated), and sharper edges bigger than that are still dulled nicely. It's still a hardtail, but not jarring - and that gives you me so much more confidence to pop the bike off the ground and play around. Overall it feels like a "smooth" pedaller, rather than a "snappy" instanteous engagement - but if you were designing your own that could be tweaked with some changes to tubing thickness/profile selection if you liked (bear in mind I'm also about 93kg riding weight, so may induce a little more flex than lighter riders!). Pedalling still feels more direct than a dual-susp bike, so it's a nice compromise between my previous harsh alloy hardtail and slighly dull feeling of carbon dual-susp bikes.

Grabbed some pics while I was out (Out of riding condition apparently, haha - it was nice to stop for a couple of breaks!)

Anyway, I'm pretty happy with how it all played out, and given the most significant change I want to make is move the stem up roughly 5mm I'm plenty happy with how it rode too! Seat tube looks mental steep, but is "only" roughly 77 degree and fits like a glove. Cheers for reading. 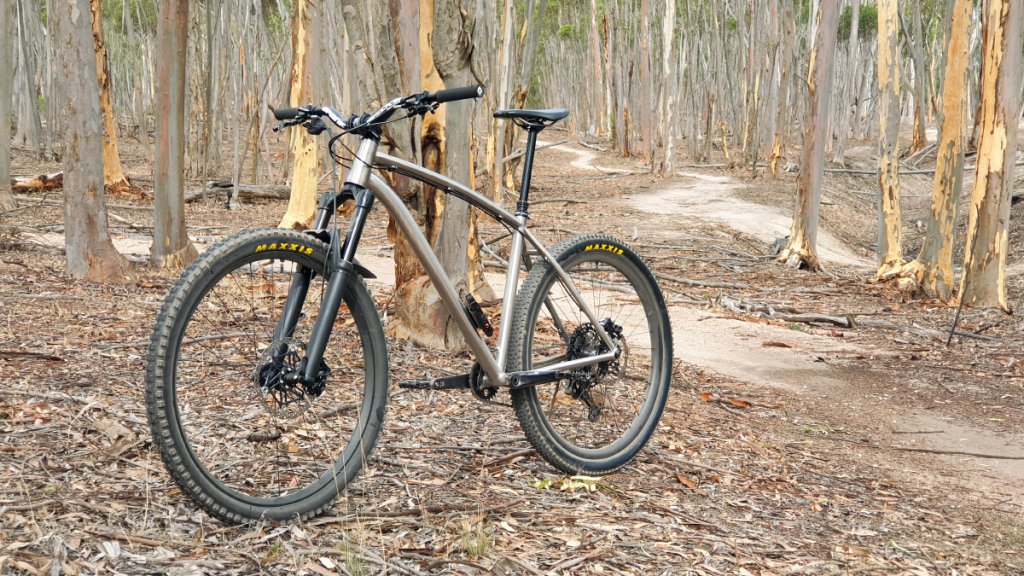 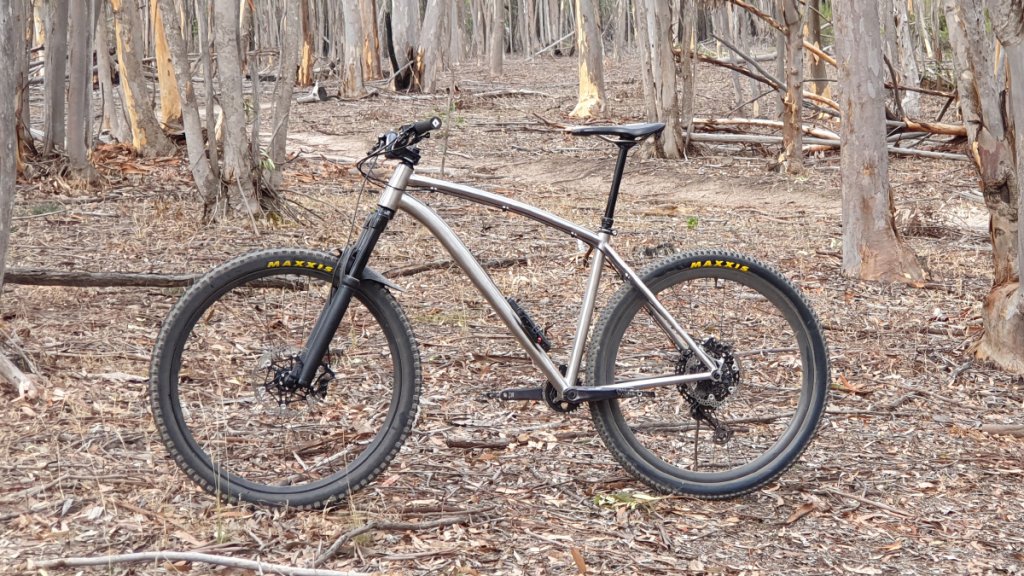 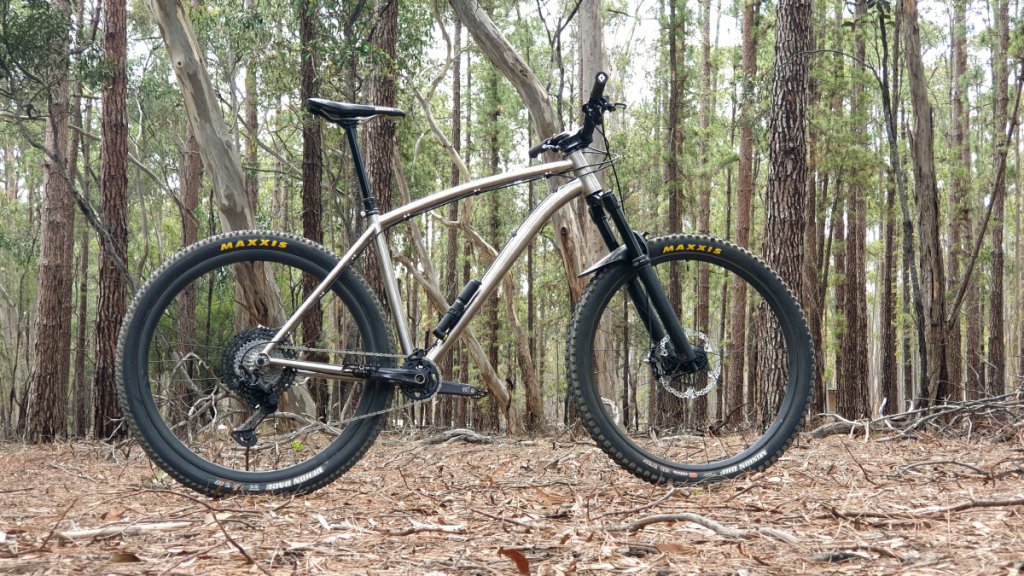 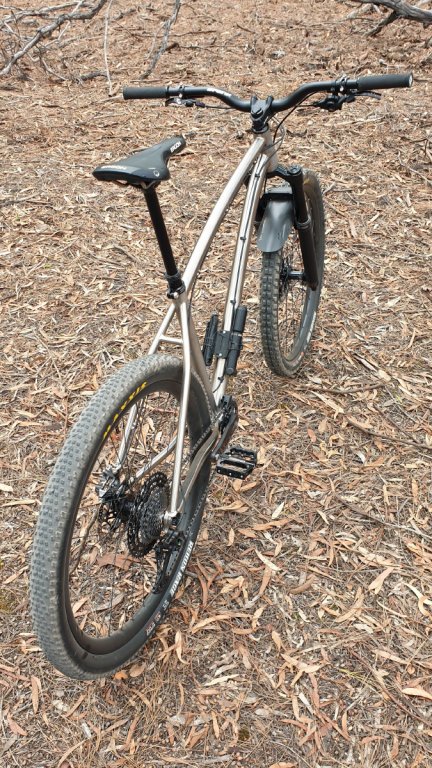 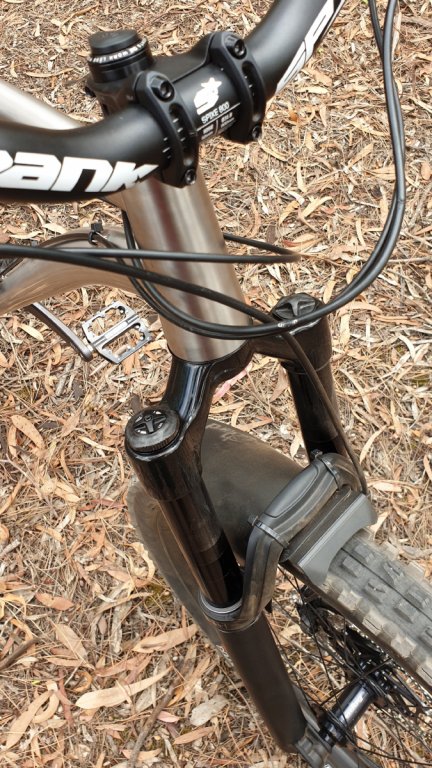 Still running the OneUp rubber band thing for the pump mount? It will snap, I’ve modded mine (and others) mounts to accept a Velcro strap instead.

Is not a gynaecologist but will look at your fork

I’m yet to hear of an unhappy Waltly customer.

How many $ for the frame. Would like to do similar to my hardtail at the end of the year.

hifiandmtb said:
Still running the OneUp rubber band thing for the pump mount? It will snap...
Click to expand...

I snapped one when I got my pants cuff hooked on the tools riding around the backyard after work one afternoon, I replaced it with two (one for safety) thin o-rings which have been going fine so far. Will probably do the same for the other side in future.

I can see the risk though, the rubber on standard One-Up bands is pretty weak.

How many $ for the frame. Would like to do similar to my hardtail at the end of the year.
Click to expand...

I think it ended up being around $850 (USD), the curved top tube added about $25 and there might've been something else that was an upcharge over standard but I can't remember what it was now (there's too many e-mails to trawl back through sorry, haha).

Beautiful @beeb A TI HT is a lot of fun. Another superb build.

beeb said:
I think it ended up being around $850 (USD), the curved top tube added about $25 and there might've been something else that was an upcharge over standard but I can't remember what it was now (there's too many e-mails to trawl back through sorry, haha).
Click to expand...

Where was the frame made?

Very nice build @beeb. Nice spec and good result with the frame! Look forward to seeing it in the flesh sometime.

FigBo0T said:
Where was the frame made?
Click to expand...

wkkie said:
Very nice build @beebNice spec and good result with the frame! Look forward to seeing it in the flesh sometime.
Click to expand...

Ta mate. We can tee something up, and I'm keen to see your Marino too.

This thing at least deserves BOTD over at Vital. Or even mention on PB. Very unique & super current geo.
S

Well done on a top bike build. Just had a look at pics on computer and wow what a bike.
You have planted a seed for me, I was thinking of building an orange p7 next but this seriously has me thinking of going a different way now.

Holy Titanium space ship Batman!
That thing is MINT.
Must have been really fun /satisfying to build a 'clean sheet' bike?

Wish I had the $$ atm to go N+Hardtail
(#stupidmortgage, #FML)

hifiandmtb said:
This thing at least deserves BOTD over at Vital. Or even mention on PB. Very unique & super current geo.
Click to expand...

Haha, cheers. I do plant to take a couple of proper pictures of this one eventually. It's a weird thing to be overtly proud of something I've deliberated designed to be understated, but I might chuck them on there once I get some better snaps.


Scotty675 said:
Well done on a top bike build. Just had a look at pics on computer and wow what a bike.
You have planted a seed for me, I was thinking of building an orange p7 next but this seriously has me thinking of going a different way now.
Click to expand...

Ta, I'm quietly glad it flew under the radar at a glance.


born-again-biker said:
Holy Titanium space ship Batman!
That thing is MINT.
Must have been really fun /satisfying to build a 'clean sheet' bike?
Click to expand...

Thanks mate. It is quite fun knowing you've got the freedom to request whatever you desire, but honestly it was also somewhat stressful in another way. Ultimately, sole responsiblity for every design consideration lies with yourself. To give an example - I moved the BB on this up 12mm higher compared to my previous hardtail as I had been regularly encountering sections of trail where I wanted to pedal, but knew I was risking pedals strikes if I tried. I knew the extra BB height would give me the extra 'breathing room' I was after, but with everything going longer/lower/slacker with every evolution at the moment I really didn't know until I rode it if I was accidentally destroying the handling of the bike I was basing my design off and largely trying to emulate. As it turns out it's fine. It's possibly not as sure-footed in quick changes of direction (but until I get the cockpit setup perfected and ride some non-sandy trails it'll be hard to know for sure), but there was so many spots where I could keep pedalling tempo and momentum up yesterday where I couldn't previously I'll forgive a potential couple-of-percent difference in one specific handling scenario.
Last edited: Jan 27, 2020

Reminds me a little of a Sklar. Very elegant, great bike!

droenn said:
Reminds me a little of a Sklar. Very elegant, great bike!
Click to expand...

The Sklar front end was definitely a significant inspiration, but I didn't want the extra seat tube support doodle. I had been tempted to mimic the BTCHN' bikes dropped seat stays, but mechanical sympathy told me it probably wasn't a good idea with TIG welded Titanium.

Cheers for the positive comments all.
K