What did you do TO / WITH / FOR your bike today!

Oddjob said:
Did you get the Park tensionmeter and centreing gauge. If not, I highly reccomend them.

Sent from my SM-G900I using Tapatalk
Click to expand...

Not today. Got them (and a few more goodies) coming from the US shortly.
C 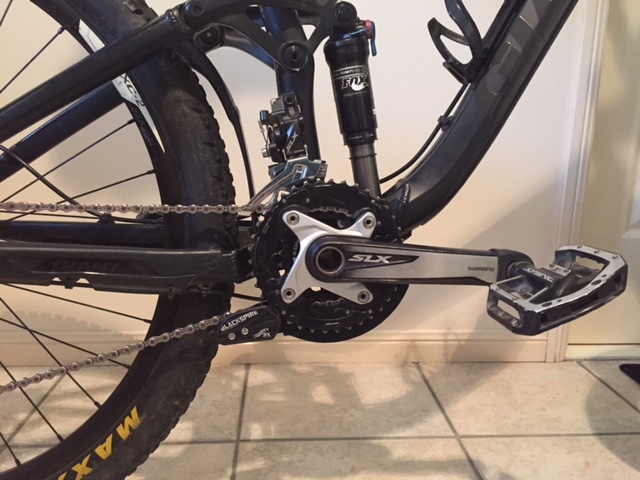 Got the twinty guide on , haven’t trail rode it yet but seems quiet , should get the chain noise down abit , I like the added bash plate , that’ll come in handy .
Hopefully the box of Michelins and brake pads wil be here soon

Ultra Lord said:
Gave it a scrub with some bike wash that was gifted me, seemed to work pretty good the bikes come up a treat and I didn’t bother hitting it with a sponge. Just sprayed it on, let it soak for a couple of minutes then hosed off.
Click to expand...


Ultra Lord said:
I did hit it with some after wash spray. turned my matte black frame somewhat shinier, but I think in a good way.
Click to expand...

Looks great! What's the name of the spray? 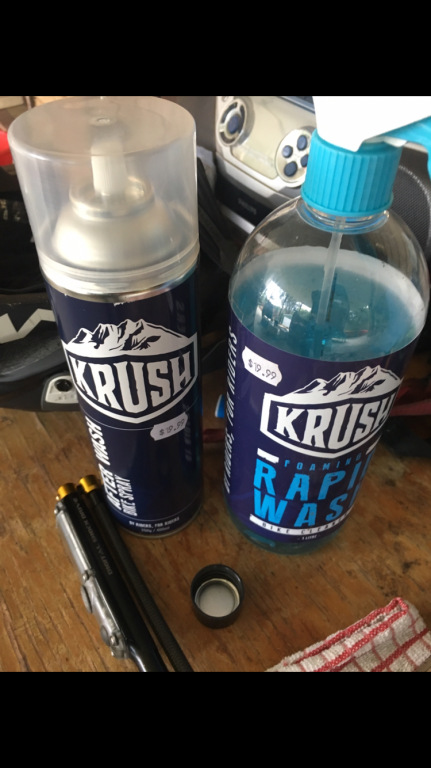 Blue muck off pretty much.

I think the spray is pretty much silicon spray, and it smells nice.

Says silicon based formula, so might be some extra stuff in there.

Took it for it's maiden voyage 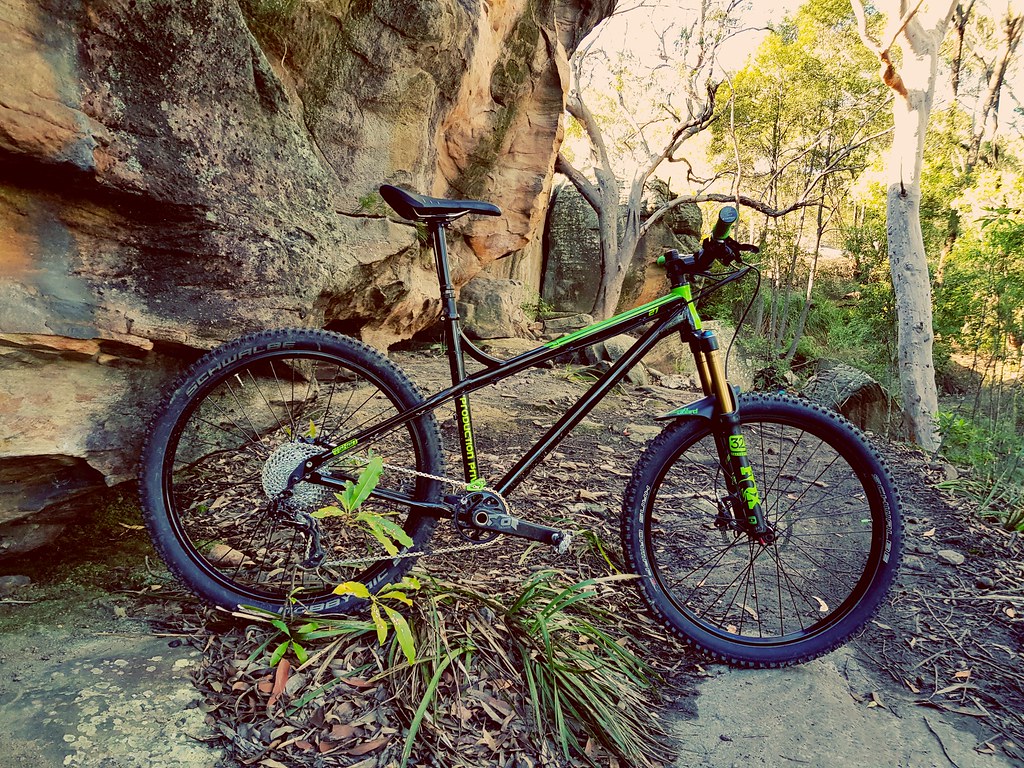 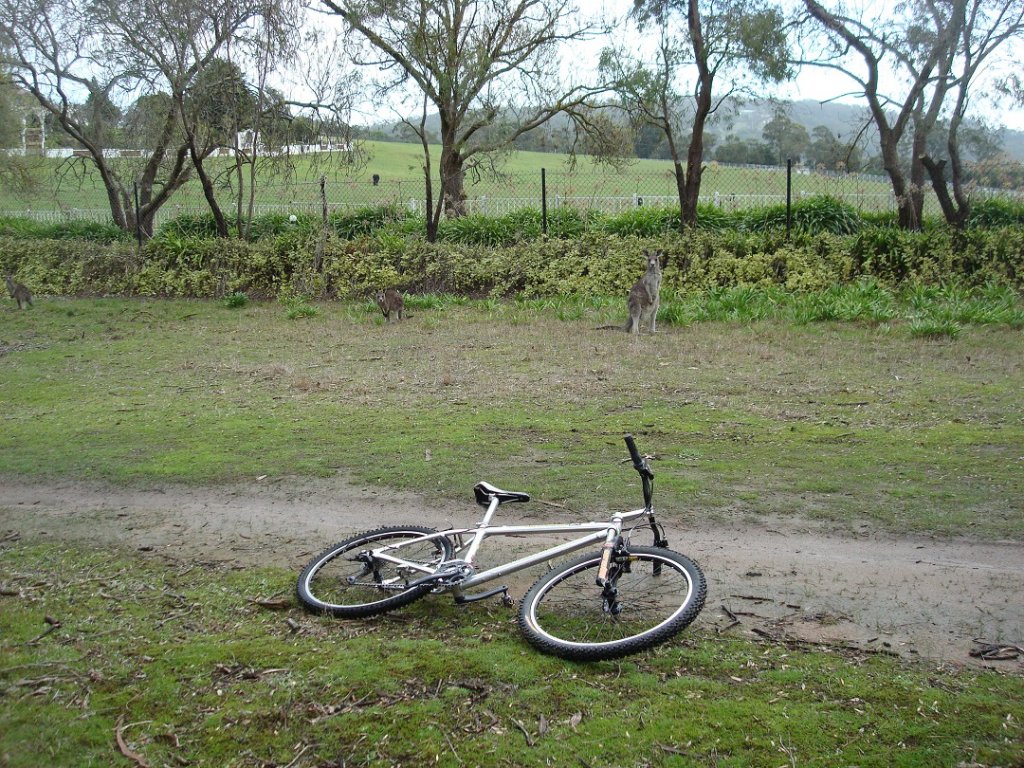 My normal MTB is out of action due to a busted back wheel.
So broke out the 21yo v-brake beast for a 35km lap lol. Fork locked itself out a qtr of the way through the ride but somehow still put in some decent times.

Action packed day today. Left Melbourne’s abysmal drenching, and looked in at Glengarry, but it was still pissing down and the trails were soaked. By the time we got to Glenmaggie, the rain had stopped and the trails were perfection. What can possibly go wrong? Well, within ten minutes, I screwed up the landing of a miniscule jump, got all sideways, burped flat the front tyre and bit the dust bigtime. Luckily I missed a big tree by a gnats whisker, but still managed to bury my right shoulder, and hyper extend my left wrist. So the front tyre was flat as a tack and while I put a tube in that, my Darl rode up and down having a fun old time. Got going again, and as soon as I hit a decent climb, the cassette was hunting up and down. Couldn’t see anything wrong, assumed I’d bent the hanger, so hit the free play adjuster, no top gear, but all good. Get to the top of Jim’s and head down, and then had another huge moment, but saved it, as the rear tyre had decided it was its turn to be flat. I must have burped it too, in the crash. While putting a tube in that I discovered the stick stuck in the derailleur. I knew internally that I should have re-adjusted the free play, but I was just totally over it. Sure enough next climb, hunting cassette, adjust free play, all good. Anyway, get to the bottom of Jim’s without any issue or additional pain, so we headed back up and did another loop. Other than the crappy grip due to running with tubes front and rear, we had an ace ride. The beer in the esky back at the car, was ab fab. Shoulders pretty sore though.

I think the spray is pretty much silicon spray, and it smells nice.

A mate of mine needs a bike so he can keep up with his boy who's just discovered riding. Got a ripper deal on a ghost amr frame and discovered that it's got a 44id head tube and tapered forks have no clearance issues.

I dug out the old "spare parts" Xfusion slant forks, the damper was broken by some ham fisted attempt at modification or servicing. Anyway, I removed the broken lockout rod and tapped a new thread into the damper shaft so I can bolt it into the upper now. Wallah, functional slants minus the lockout function!

On a side note, if anyone has a slant (or compatible) fork and wants a 160-130 travel adjust air shaft, let me know. Happy to swap this out for a standard one as this bike will be using 130 only...

Sent from my F5321 using Tapatalk

Plankosaurus said:
A mate of mine needs a bike so he can keep up with his boy who's just discovered riding. Got a ripper deal on a ghost amr frame ...
Click to expand...

Plank, geez, if you’re ever short on mates down the track...

Lazmo said:
Plank, geez, if you’re ever short on mates down the track...
Click to expand...

Haha! I'm like a telco, offer's only open to new riders


His boy didn't do bad either, I dug up a decent older specialized epic for him, not bad for a first bike

Sent from my F5321 using Tapatalk

Gave the old banger a clean up after yesterdays ride.
Seems I was lucky to make it back to the car! Exposed tube and all.
Perhaps running 20yo bike with 10yo tyres was not such a great idea lol. 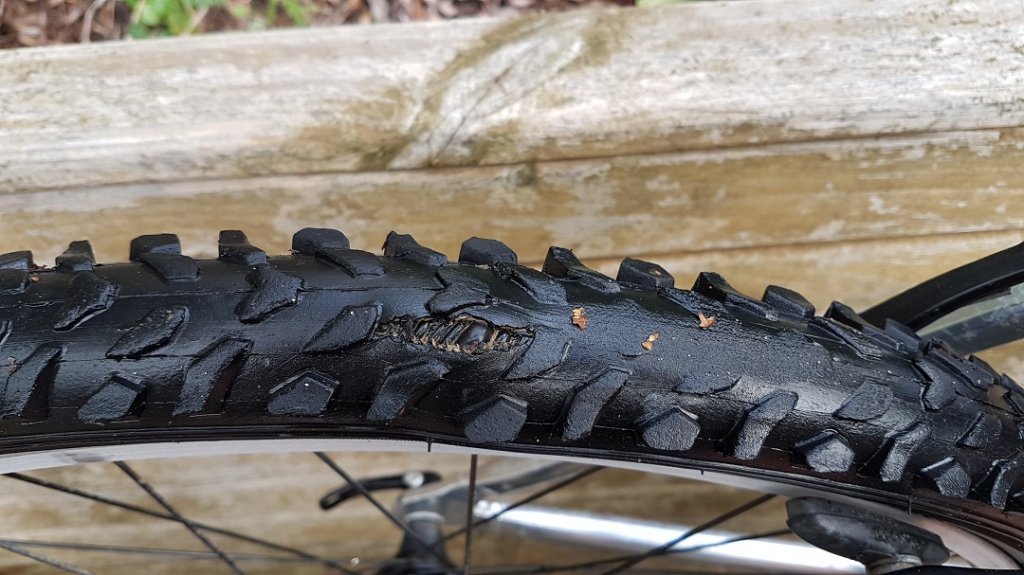 Well they worked didn't they? what more do you want from the old guys? Time for retirement
M

Chriso_29er said:
Gave the old banger a clean up after yesterdays ride.
Seems I was lucky to make it back to the car! Exposed tube and all.
Perhaps running 20yo bike with 10yo tyres was not such a great idea lol.

Bet you were stoked though back in the day when you did that massive skid down the driveway that left the tyre in that condition.

Nah, that was from recently riding with the kids after my 7yo asked if I can 'drift' ha ha.

If I can't have his babies, I'll settle for his tyres... 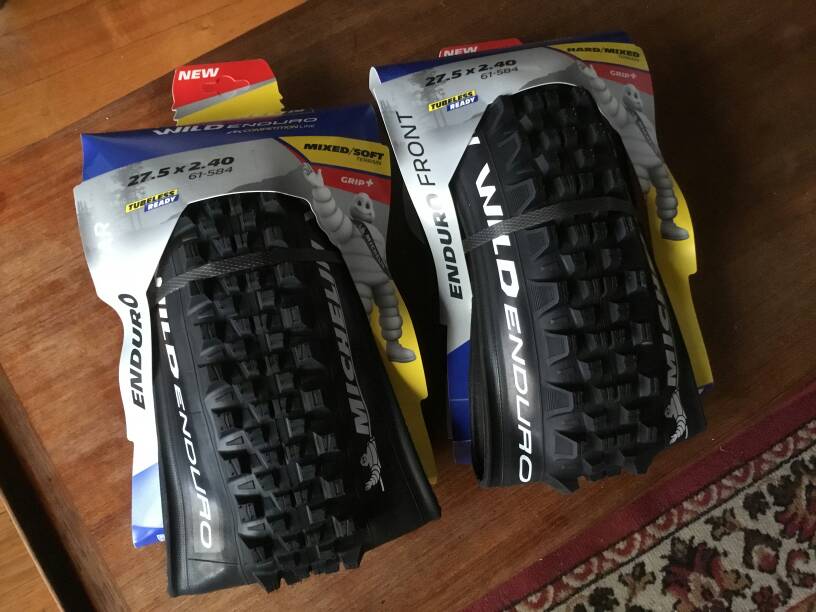 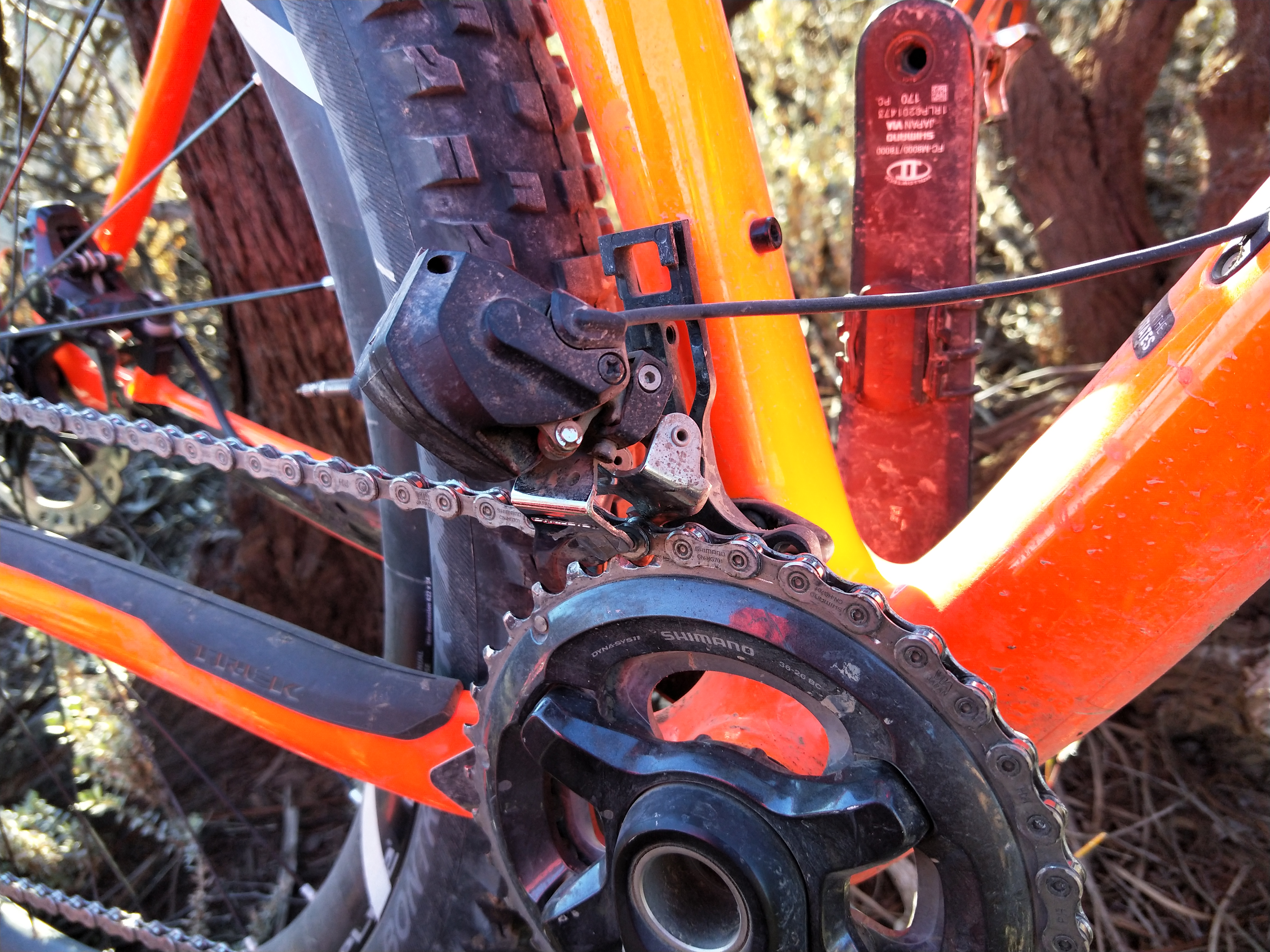 It grumbled through a shift about 100 meters before I felt something brush the inside of my leg. Seems the securing bolt fell out. Was a little unexpected.

A strategically placed stick underneath and a Garmin mount rubber band (not pictured) around the top held it in place for a slow(er) ride back. 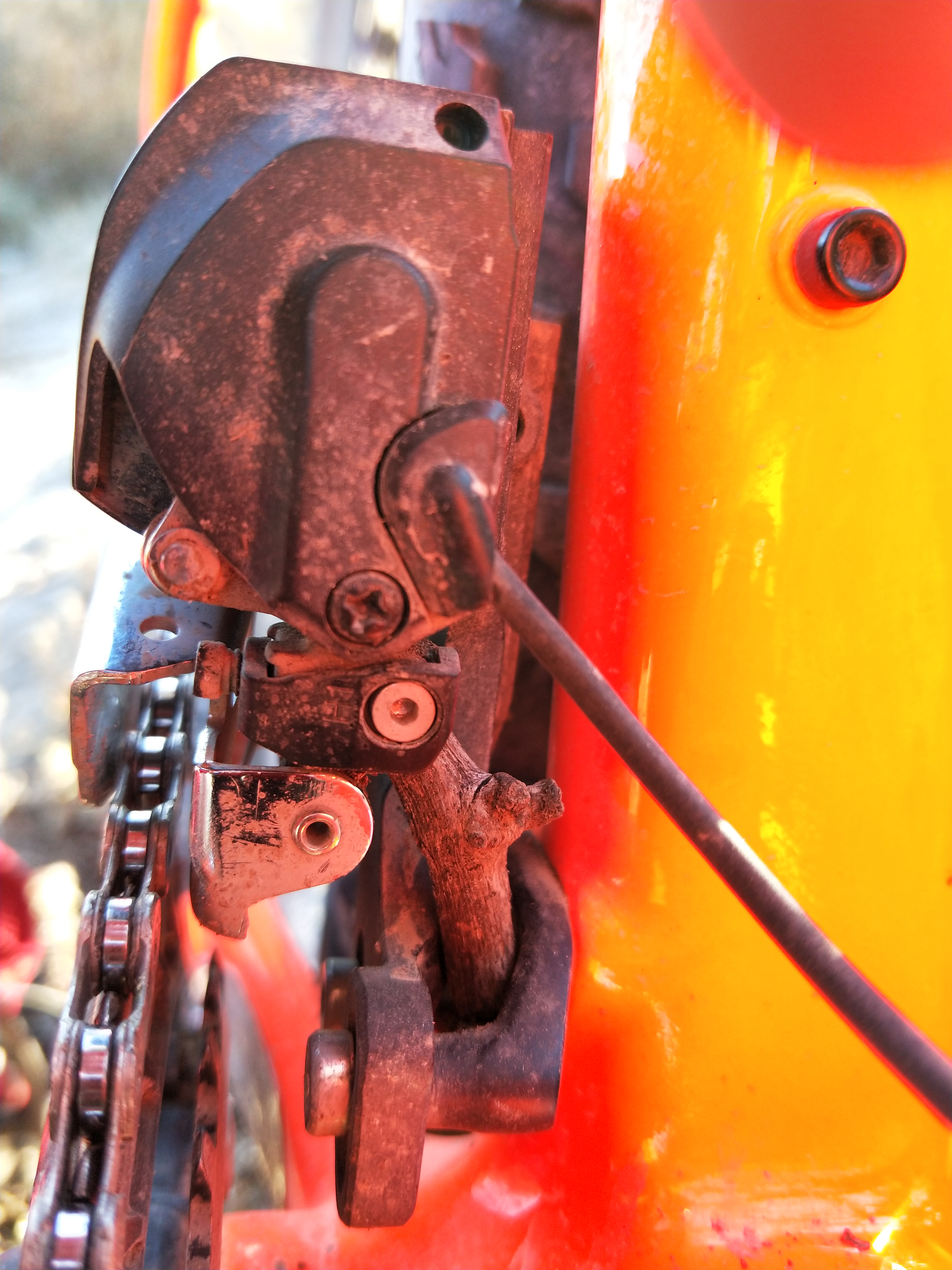